A Survivor's Story: Choosing Life in a Culture of Death 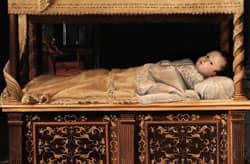 Sitting in a doctor's office, a married couple quietly discussed their excitement and anticipation as the reality that they were finally going to become parents began to sink in. After more than ten years of waiting, hoping, and praying that their marriage would be blessed with the gift of a child, the couple (both in their early 30s) received news on Christmas Eve that the wife was indeed pregnant.

The doctor came into the room and sat down at his desk, smiling at the couple as he proceeded to pull out the wife's medical file.

"It says here that you were diagnosed with multiple sclerosis approximately twelve years ago," the doctor stated. The wife nodded, knowing this was likely the reason why the couple was having trouble conceiving.

"It seems to me," the doctor continued, "that there could be very serious medical ramifications if you are to continue this pregnancy."

The couple gave each other a concerned look.

"What do you mean, if I continue the pregnancy?" the wife asked.

"Well, due to the many medical complications that could ensue, your health could be put at serious risk. You wouldn't be able to take medication during the pregnancy, and if you were to have an attack or exacerbation, well, it could be dangerous for both you and the child."

Becoming uneasy, the husband asked, "What are you suggesting?"

The doctor paused, then stated, "I would suggest terminating the pregnancy."

At his words, the wife looked over at her husband, tight-lipped, and stood up. "I'm leaving," she said angrily, walking out of the office. Her husband followed close behind. The doctor had been nice enough, but his opinion was one the couple had never expected.

"I don't care what happens to me," she would later tell her husband. "If it has to come down to my life or the child's, I want you to save the baby. I'm having this baby."

The husband concurred, knowing the risks and praying that he wouldn't be faced with such a decision.

As it turned out, the doctor was completely wrong. The wife was as healthy as she had ever been in her life during the pregnancy, and, according to her husband, had never looked more radiant. When the time came to deliver her child, she did not even have strong labor pains. She described the entire pregnancy and birth as a gift and blessing, even though it could've potentially cost her her life.

That couple was my parents, Ben and Carmen Pirraglia, and that baby in the womb back in January of 1981 was me.

There are many sound, scientific, and just plain common sense arguments that can be made against abortion, but perhaps the best ones are the "survivor stories" of those who were born after January 22, 1973. I am one of those survivors, and I cannot understand how anyone born post-Roe v. Wade can be for abortion, since, according to this decision, they themselves could have been killed in their mother's womb.

Perhaps the problem is that we live in a very self-centered, "me-oriented" society, with our iPads, iPods, and e-instruments that keep us plugged in to the latest news, sports, and entertainment, but can easily pull us away from normal social interaction with those closest to us.

Maybe the trouble is that we fear authority, and immediately assert our "rights" when someone "tells us what to do," instead of using our intellect to think about what they are telling us. The issue could also be the media's disdain for organized religion and God in general. If we don't believe life is sacred, why would we choose life over more practical matters, like money or convenience?

Whatever the reasons, the sad bottom line is that we are less of a self-sacrificing culture and more of an "other"-sacrificing culture. We sacrifice the "other" that we can't see or don't know—like an unborn child—for our own rationales and excuses. The unborn child is seen as an inconvenience and an expense, not a gift from God.

When I was conceived, I had three strikes against me:

But my mom was a woman of faith and common sense, along with a lot of courage. She was not afraid of the risks involved because she knew the life inside her was her child, not merely a clump of cells. We all start out this way at conception, and not one human person can say they did not go through the same changes before being born. I was one of the blessed ones of my generation, as more than 52 million babies have been killed in their mother's womb since the legalization of abortion.