The Vocation You Pray for May Be Your Own 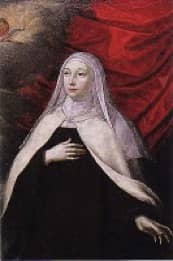 This is vocation awareness week, a time when we're supposed to talk about possibilities to the priesthood, the religious life, the diaconate or to marriage. We're supposed to pray for vocations, too.

As a father and husband, I have been known to muse that my options are limited; I can't literally go "to the Desert," I quip "maybe in the future."

Sure, I will. In the future.

Then I found this story of a beata who did just that: Blessed Marie of the Incarnation, whose feast day is April 18th.

Keep this in mind as you pray for vocations, because your prayer might just be answered by an opened door. Who is to say what lies ahead for us? God knows. Barbara Avrillot was a mother of six, but her babies grew up and her husband passed away, opening the door to a life she had always admired. Let's take a look.

What follows in italics is from the citation on Marie found in the Catholic Encyclopedia at New Advent.

Known also as Madame Acarie, foundress of the French Carmel, born in Paris, 1 February, 1566; died at Pontoise, April, 1618. By her family, Barbara Avrillot belonged to the higher bourgeois society in Paris. Her father, Nicholas Avrillot was accountant general in the Chamber of Paris, and chancellor of Marguerite of Navarre, first wife of Henri IV; while her mother, Marie Lhuillier was a descendant of Etienne Marcel, the famous prévôt des marchands (chief municipal magistrate). She was placed with the Poor Clares of Longchamp for her education, and acquired there a vocation for the cloister, which subsequent life in the world did not alter. In 1684, through obedience she married Pierre Acarie, a wealthy young man of high standing, who was a fervent Christian, to whom she bore six children. She was an exemplary wife and mother.

So she came from the upper crust of society and basically went to a boarding school (of sorts) with the Poor Clares. Sounds like something I've read before in a novel by Sigrid Undset. She married well and then had six children, which will definitely keep any mom busy for a while. Any dad, too. Speaking of dads, he had his hands full at work. Take a look.

Pierre Acarie was one of the staunchest members of the League, which, after the death of Henry III, opposed the succession of the Huguenot prince, Henry of Navarre, to the French throne. He was one of the sixteen who organized the resistance in Paris.

Tea party anyone? Being a rich and well-placed gentleman, I daresay he thought he could change the world, and obviously win. This story is getting good. Stand-by for an act of God.

The cruel famine (!), which accompanied the siege of Paris (war!), gave Madame Acarie an occasion of displaying her charity. After the dissolution of the League, brought about by the abjuration of Henry IV, Acarie was exiled from Paris and his wife had to remain behind to contend with creditors and business men for her children's fortune, which had been compromised by her husband's want of foresight and prudence.

Ouch. Dad wound up on the wrong side in this fight and was sent away (in irons?!). The family fortune is compromised too? Uh-oh, now mom has to fight to save the estate and provide for her kids as well. I hope she is up to the challenge. Surely, it can't get any worse than this.

In addition she was afflicted with physical sufferings, the consequences of a fall from her horse, and a very severe course of treatment left her an invalid for the rest of her life.

And I thought Kristin Lavransdatter had it tough. But truth is stranger than fiction, isn't it? And, ahem, "severe course of treatment" most likely means a broken leg didn't heal well. Game over? Not with her network, nor with her example of charity and good works.

At the beginning of the seventeenth century Madame Acarie was widely known for her virtue, her supernatural gifts, and especially her charity towards the poor and the sick in the hospitals. To her residence came all the distinguished and devout people of the day in Paris, among them Mme de Meignelay, née de Gondi, a model of Christian widows, Mme Jourdain and Mme de Bréauté, future Carmelites, the Chancellor de Merillac, Père Coton the Jesuit, St. Vincent of Paul, and St. Francis de Sales, who for six months was Mme Acarie's director.

Yeah, you read that right, St. Francis de Sales and St. Vincent de Paul were in her Rolodex and paid calls to her salon. Sheeeeesh.