We're Becoming a Bunch of Babies

A melancholy truth was brought home to me this week as I visited with young nieces and nephews who participate—as they all do—in the wonders of modern technology. Rest assured, this is not another rant about how "kids these days" always have their heads down, regardless of the social situation, pecking away at their i-Thises and i-Thats. The etiquette and comportment discussion is for another time. Today's column is about how everything in life has to be—or will soon have to be—adjudicated by the government.

The real beginning of this thought lies with the Federal Communication Commission's decision last week to go forward with its controversial "net neutrality" regulations. There are potentially serious consequences from this regulatory gambit for our Internet freedom, but in the short term the consequence everyone will feel is an increase in the cost of Web access. The reason for the increase is that service providers will be channeled into charging customers for the total amount of data they interact with, rather than for a data-streaming rate, which is the current basis of service.

Downloading videos and images, or participating in online gaming, is extremely data-intensive, as almost everyone today knows. We have internalized a set of lore about the Internet; most readers understand the difference between data rate—the difference between high-speed and dial-up service—and the total amount of data bits involved in different files. The latter will become the basis for pricing Internetservice under net neutrality. If you haven't yet thought about this, your eyes may be starting to bug out of your head. I know mine were when this first became clear to me some months ago.

It was with this concept in mind that I watched my nieces and nephews cluster around an iPhone, waving it in the air to find a wireless Internet signal in Mom's living room. It struck me forcefully that the quiescence of Internet rate-payers about unauthorized use of their local wireless signals is not going to last much longer. With service priced on a total-data basis, their motivation to defend their wireless hubs from third-party access will hit a critical threshold. They will have to take action: either spending money to encrypt or otherwise defend their signals, or—any bets on this one?—demanding that government regulation do the defending for them.

Considered dispassionately, this "problem" is entirely artificial. Created by government regulation, it will create new costs and new pretexts for regulation. It is also a wonderful example of the phenomenon with which I am ultimately concerned, which is our modern tendency to orient ourselves on government brokerage of our every human interaction—instead of on face-to-face communication and resolution directly with our fellow citizens. When it comes to our social relations, there increasingly seems to be no intermediate setting between "indifference" and "regulation or litigation." Yet the richness and rewards of community life are bound up in that very intermediate setting: the stage at which we turn to each other, in our capacity as private individuals, to work things out.

It is instructive to reflect on which passage of life imposes this posture on us. It is when we are small children that we have to appeal to an authority on issues large and small. We don't have the maturity or self-control at that point to deal with one another reasonably. Among toddlers, the basis for trust is the existence of an authority, mere feet away and ready to issue basic instructions like "Share the toys" or "Stop pestering your brother."

But when we put away childish things, we are supposed to bear within each of us the imprint of trustworthiness. Honesty, basic goodwill, and the keeping of our word are actually defenses against the organizational urge to infantilize us. Businesses that are run on this principle grow and attract loyal customers. Neighbors who act on it retain precious friendships over decades. Children reared on it are responsible and employable at an early age. Cultivating and expecting trustworthiness is a far better way to live than trying to substitute regulation and lawsuit-prone suspicion as our primary societal lubricants.

The loss of this intermediate setting in social relations affects issue after issue. There is no reason, for example, why members of a community should not be able to work out the sharing of public space among different religions. Some ring bells, some use loudspeakers, some chant, some ring massive chimes, while others request quiet at particular times. Seen in a commonsensical light, it is infantile to run to ever-higher levels of government with each new dilemma, complaining in "rights" language about the behavior of other religionists in the manner of three-year-old Brodie tattling importantly on four-year-old Mikayla. 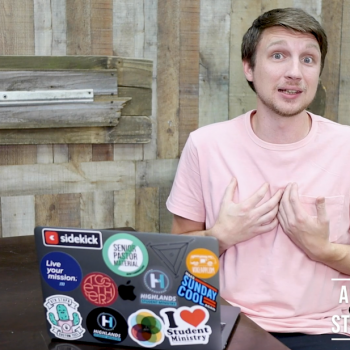 Florida Pastor Arrested for Attempting to Have Sex with Girl in His Youth...
Hemant Mehta
Get Patheos Newsletters
Get the latest from Patheos by signing up for our newsletters. Try our 3 most popular, or select from our huge collection of unique and thought-provoking newsletters.
From time to time you will also receive Special Offers from our partners that help us make this content free for you. You can opt out of these offers at any time.
see our full list of newsletters
Editor's picks See all columnists