What Is British Traditional Witchcraft?

The Gardnerian Tradition, along with the Alexandrian Tradition, Algard Tradition, Central Valley Wicca, and a handful of others. I've heard conflicting stories about some of the others; I don't doubt their claims, mind, I just don't know personally. Among them are the Mohsian Trad, Blue Star, and a few others.

What's the difference between BTW and non-BTW?

There are a couple of core differences. Some groups may share in some of these traits (particularly if they are descended from BTW groups, though they aren't likely considered to be BTW themselves), but most of BTW as I understand it has these similarities:

Descent from the New Forest Covens: The Traditions of BTW can all trace their lineage to the so-called New Forest coven(s), a tradition of witchcraft found in a specific area of Britain. They may or may not have had links to other groups of witches in Britain or abroad, but at the core, BTW traces its origins to the New Forest region.

Oathbound: BTW Traditions maintain some measure of oathbound material. We do this to protect the Mystery, and to allow the initiate to experience our Craft without preconceived notions. If you read a rite, you can't help but make assumptions and conclusions about what it means, how it works, and why it is done. We need our initiates to come into the Circle free of those assumptions, so that they can experience the rites without assumptions.

Initiatory: BTW traces lines of initiation; Alexandrian and Gardnerian in particular trace lines of cross-gendered initiation. That is, in BTW, a priestess initiates a priest, and vice versa. These lines of initiation can be traced back to the founders of those respective Traditions.

Orthopraxic: We do not mandate belief; we mandate practice. In other words, we do not care what you believe; you may be agnostic, polytheistic, monotheistic, panentheistic, animistic, or any variety of other classification of human belief. We care only that you learn and pass on the rites as they were taught to you. Initiates must have similar experiences with the rites, though the conclusions they come to as a result of them may be wildly different. In some religions, belief creates practice. In our priesthood, practice will create belief.

Mystery: BTW is a Mystery Tradition. Now, this usually means that we have Oathbound material, as detailed above. But more than that, it means that we are the guardians of a Mystery that can't be told about, it can only be experienced. Everyone experiences and understands this Mystery in a different way, though we come to it through the same rites.

Inherited Book of Shadows: To the best of my knowledge, most BTW traditions maintain a Book of Shadows by tradition, which initiates are required to copy out (generally by hand, at least in my Tradition). This book is considered oathbound, as it not only contains the basic elements of our rites (though not all of them; it is necessary to combine the written material with our oral lore to gain the true depth of what is in the BoS), but is also a sign of membership.

Interestingly, folks who identify me as a member of a tradition seem to want to know how I would classify their practices. Let me emphasize this: Unless you have been brought into a specific tradition, you don't belong to one.

Of course, the above only applies to the practice of witchcraft, as I understand it. There may or may not be exceptions, and other pagan paths have their own rules for how you belong to them or not. I can't speak to those.

What if I want to become BTW?

You've got a long road ahead of you. First, you should get a better understanding of what interests you. The Witches' Voice includes an excellent database of various witchcraft and other pagan traditions here. Go and read up on the Traditions I've mentioned above.

Then, if you think you want to become a Seeker, there are a couple ways of doing that. First, if there is a coven of one of those Traditions in your area, they might just be on The Witches' Voice. Look for things called "Outer Groves" or "Outer Courts," too. Traditional covens often create these "beginner groups" as a means of not only teaching newcomers, but to get to know you to see if you are right for their coven (and so you can see if they are right for you). 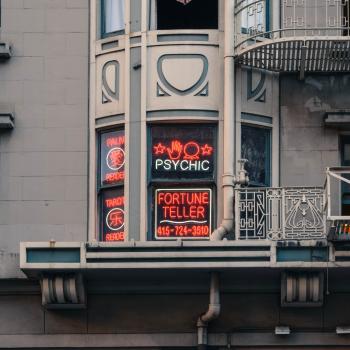 Not My Psychic Circus, Not My Magic Monkey
Thumper Forge
2

The first gay Captain America is coming: Four ways to care for our children...
Jim Denison
3

Two Book Ideas To Give As RCIA Gifts
William Hemsworth
4

Seeing is not Believing: Doubting Thomas
Frederick Schmidt
Get Patheos Newsletters
Get the latest from Patheos by signing up for our newsletters. Try our 3 most popular, or select from our huge collection of unique and thought-provoking newsletters.
From time to time you will also receive Special Offers from our partners that help us make this content free for you. You can opt out of these offers at any time.
see our full list of newsletters
Editor's picks See all columnists