Why We Have Children 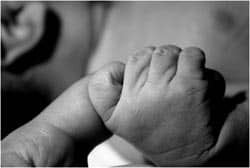 I hate the memory of it. I hate it.

I hate how stiff my daughter's body felt in my arms that night. I hate how vacant and soulless her face had become, unmoving save for the veined whites of her eyes as the irises fluttered up under the skull.

It happened on a cold October evening, when an early snowfall still covered the streets north of Boston. We parked beside our friends' home, and I noticed the flush of red in my daughter's cheeks. I checked her brow—it was hot. I should have done something more, but I thought perhaps she had simply over-heated in her coat and car seat. So I took her inside and watched as she tried to play. On most days our daughter, thirteen months old, was an overflowing wellspring of energy and laughter and fleet-footed enthusiasm. On this day, something seemed off.

We sat down to dinner, and then it happened. Sitting beside me in her booster chair, she turned her head upward—further, further, and then unnaturally far, as though she followed the path of a butterfly along the ceiling and down the wall behind her. Her arms were clamped to her sides, and when I bent around her I saw her rolling eyes. She looked possessed.

A moment later we were back in the car, racing through the snow-swept streets as I clutched her tiny convulsing body against my chest. Her lungs did not inhale so much as they shuddered in pitiful little gasps. I whispered "it's okay" and "daddy's here," but it was not okay. Every time the orange glow of a passing streetlamp brushed across her face, it showed the same rolling white eyes. That's the memory I hate the most: the memory of what it felt like to be losing her. I was pinned between the immensity above and the miniscule below. The universe of my care, all my joy in the world, was wrapped in this frail two-foot and twenty-pound vessel, this brilliant soul enfleshed. And as the soul slipped through my fingers, I sensed it above me: the endless ocean of grief that would fall and consume me if I lost her.

Why do we have children? The question lies beneath social and political issues we confront today, from abortion and adoption to declining fertility rates in developed nations and the relative virtues of "eastern" and "western" forms of parenting. In 2010 a whole host of articles and commentaries debated the finding that parenthood does not make us happier. So what is the point? Why do we make all the extraordinary sacrifices that parenthood requires?

There was no part of me, as we rushed to the emergency room that night, that wished my daughter gone and my freedom restored. Not the slightest part of me thought I should be happier without her. Instead, I knew with terrible certainty that if this small, fragile, quivering creature against my chest were to leave me, she would take all my joy with her. And no part of me would have preferred that she had never come to be, if she could only be for thirteen months and then be no more. Her thirteen months had made my life worth living.

I had felt a twinge of disappointment when the doctor informed us that we were having a girl. Connecting with boys had always come easily; a little wrestling, a little flying around the room, a few uncivilized sound effects, and we were buds. Yet when I went home from the ultrasound, and sat down alone to write, I dissolved into a spectacular emotional wreck. At the thought of fathering a daughter, waves of joy rolled through me. I loved my little girl long before I met her. I read her stories in the womb, sang to her, prayed for her. It wouldn't matter what she looked like or what her personality was. She was mine—mine to nurture and protect, mine to train and guide, and mine to love with all my might.

We have children because love overflows. I believe as a Christian that I am created in the image of a God who is Love, a God whose love so desired an object that it brought us into being. Although the wisdom and power of love within us is clouded and twisted by sin, still the image of Love is there. We have children because love is essentially creative, and because our souls long for other souls we can love lavishly and forever.

Love precedes the beloved. That is why it is unconditional. In bearing children we participate in God's continuing creative act, and in sustaining and guiding and sacrificing for our children we reflect God's redemptive act. Theologically, then, we have children because we are made after the image of a God who had children, a God who is irreducibly relational and endlessly creative.

We have children because they make us human. Throughout my teens and twenties, I often went for years without being deeply moved. My friends called me even-keeled or unflappable, but the truth is that I almost never felt—really felt—anything at all. Not joy, not sorrow, not anger or hurt or fear. This might sound like a good thing. It was not. Every few years my heart would return to me, and for no apparent reason I would find emotions falling down like spring rains on parched soil. I was always relieved to feel connected again, vulnerable, alive—but then the season of feeling would fade and would leave me impassive again.