Jesus and the Jewish Roots of the Eucharist: A Book Excerpt

This month in the Patheos Book Club, we're discussing Brant Pitre's new book, Jesus and the Jewish Roots of the Eucharist. Read an excerpt of Chapter 1, below, and then join the conversation. 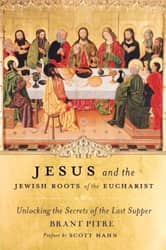 The Mystery of the Last Supper

Jesus of Nazareth was a Jew. He was born of a Jewish mother, received the Jewish sign of circumcision, and grew up in a Jewish town in Galilee. As a young man, he studied the Jewish Torah, celebrated Jewish feasts and holy days, and went on pilgrimages to the Jewish Temple. And, when he was thirty years old, he began to preach in the Jewish synagogues about the fulfillment of the Jewish Scriptures, proclaiming the kingdom of God to the Jewish people. At the very end of his life, he celebrated the Jewish Passover, was tried by the Jewish council of priests and elders known as the Sanhedrin, and was crucified outside the great Jewish city of Jerusalem. Above his head hung a placard that read in Greek, Latin, and Hebrew: "Jesus of Nazareth, King of the Jews" (John 19:19).

As this list demonstrates, the Jewishness of Jesus is a historical fact. But is it important? If Jesus was a real person who really lived in history, then the answer must be "Yes." To be sure, over the centuries, Christian theologians have written books about Jesus that don't spend much time studying his Jewish context. Much of the effort has gone into exploring the question of his divine identity. However, for anyone interested in exploring the humanity of Jesus—especially the original meaning of his words and actions—a focus on his Jewish identity is absolutely necessary. Jesus was a historical figure, living in a particular time and place. Therefore, any attempt to understand his words and deeds must reckon with the fact that Jesus lived in an ancient Jewish context. Although on a few occasions Jesus welcomed non-Jews (Gentiles) who accepted him as Messiah, he himself declared that he had been sent first and foremost "to the lost sheep of the house of Israel" (Matthew 10:5). This means that virtually all of his teachings were directed to a Jewish audience in a Jewish setting.

Brant Pitre talks with Patheos about Jesus and the Jewish Roots of the Eucharist.
Additional review and discussion of the book.

For instance, during his first sermon in his hometown synagogue at Nazareth, Jesus began to reveal his messianic identity in a very Jewish way. He did not shout aloud in the streets or cry out from the rooftops, "I am the Messiah." Instead, he took up the scroll of the prophet Isaiah and found the place that spoke of the coming of an "anointed" deliverer (see Isaiah 61:1-4). After reading Isaiah's prophecy, Jesus closed the scroll and said to his audience, "Today, this scripture has been fulfilled in your hearing" (Luke 4:21). With these words, he proclaimed to his fellow Jews that their long- held hope for the coming of the Messiah, the "anointed one" (Hebrew mashiah), had at last been fulfilled—in him. As we will see over the course of this book, this was the first of many instances in which Jesus would utilize the Jewish Scriptures to reveal himself to a Jewish audience as the long-awaited Jewish Messiah.

You Shall Not Drink the Blood

However, if Jesus did in fact see himself as the Jewish Messiah, then we are faced with a historical puzzle—a mystery of sorts. On the one hand, Jesus drew directly on the Jewish Scriptures as the inspiration for many of his most famous teachings. (Think once again of his sermon in the synagogue at Nazareth.) On the other hand, he said things that appeared to go directly against the Jewish Scriptures. Perhaps the most shocking of these are his teachings about eating his flesh and drinking his blood. According to the Gospel of John, in another Jewish synagogue on another Sabbath day, Jesus said the following words:

"Amen, amen, I say to you, unless you eat the flesh of the Son of Man and drink his blood, you have no lifein you; he who eats my flesh and drinks my bloodhas eternal life, and I will raise him up at the lastday. For my flesh is food indeed, and my blood isdrink indeed . . ." This he said in the synagogue,as he taught at Capernaum. (John 6:53-54, 59)