The Jewish Roots of the Eucharist: An Interview with Author Brant Pitre

In this sense, Jesus does not reject Jewish tradition in order to reveal his divine identity; he draws upon it and transforms it to reveal that in him, so to speak, 'something greater than the heavenly manna is here'. The eternal Word that is made flesh in the Incarnation has not only existed since the beginning (like the manna), but before the world was made (Jn. 1:1-14).

"The Bread of the Presence" or "The Bread of the Face," might be a term unfamiliar to many, and you discuss this in relation to the Ark, and you go all the way back to the priest Melchizedek and to the idea of continual ritual and of a common thread that joins us to our origins. Everything that has passed, and everything that is to come seems geared to bring us "back to Eden." Can you elaborate a little?

One of the great themes of the Bible, recently being rediscovered by biblical scholars, is the importance of the Jewish expectation of a new creation. From a Jewish perspective, God's plan of salvation is not only focused on the salvation of the souls of his people. It also includes the restoration of the cosmos, and the advent of a "new heavens and a new earth" (Is. 64-65). This is directly related to what happens in the Eucharist, in which the bread and wine of this creation are taken up by the priest, offered to God as a perfect offering, and then transformed in the body and blood of the risen Christ, who is "the firstfruits of the resurrection of the dead" (1 Cor. 15).

Sometimes Catholics tend to forget that the Eucharist is not just the crucified body of Jesus; it is the crucified and resurrected body of Jesus. In his risen Body, Jesus is no longer bound by space or time; he can appear when he wills, where he wills, under whatever appearances he wills (think Road to Emmaus), because he is the beginning of the new creation. As he says in the book of Revelation: "Behold, I make all things new" (Rev. 21). This 'making new' of all things takes place at every single Mass, with every single host, and every single chalice, and every person who receives them, until Christ becomes "all in all" (1 Cor. 15). It is no wonder that all of the ancient Christian Church Fathers spoke of the Eucharist as the "fruit of the Tree of Life," which Adam and Eve were prohibited from eating, but which we, in the Eucharist receive. Just as with the fruit of the Tree of Life, "whoever eats this bread will live forever" (Jn. 6:51).

Changing gears a little, your details on how the Passover evolved up to Jesus' time were particularly instructive, as were your vivid descriptions of Jerusalem and the activity of the temple priests during the ritual sacrifice—the casting of the blood upon the altar. One gets a sense of Jerusalem literally awash in blood—the image is so dramatic it repulses any notion that we were ever intended to think of blood as metaphor. It is difficult not to imagine the smell, the stickiness of blood that would bind it, in a manner of speaking, to the Jewish people. This is so primitive and fantastic and yet we still, as it were, "live" this reality today. Can you talk a little about this preponderance of blood in relation to covenant, both then and now?

Sure. For ancient Jews (like many other religions), blood stood at the center of religious worship and sacrifice. The reason is simple. As the book of Leviticus states: "the life is in the blood" (Lev. 17:11). The shedding of blood is how the covenants were made and maintained—the sacred family bonds between God and his people that mark key moments in salvation history. At the time of Jesus, there was no festival more marked by blood than that of the Passover, when literally hundreds of thousands of lambs would be offered in sacrifice, and the channel that ran from under the altar into the river Kidron would be full of blood and water.

For Catholics, blood still stands at the center of our worship. Though the Temple was destroyed long ago (A.D. 70), and the pouring out of the lamb's blood has long since ceased, to this day, on every altar, at every Mass, the blood of the new Passover lamb is poured out, so we might receive his life: "Unless you eat the flesh of the Son of man and drink his blood, you have no life in you," says Jesus (Jn. 6:53).

Think of it this way: If the Eucharist really is the body and blood of Jesus Christ, then how much blood has flowed from his side since that first Good Friday, over 2000 years ago? How many Masses have been offered? How many millions of chalices have been poured out? How much of his Precious Blood? When we see it this way, we realize that however much lamb's blood was poured out on the altar in the Temple, these are but a shadow of the Eucharistic blood that would be "poured out for the forgiveness of sins" (Mt. 26:28).

Scientology Assists: What Are They and How Do They Help?
ScientologyBeliefs
2 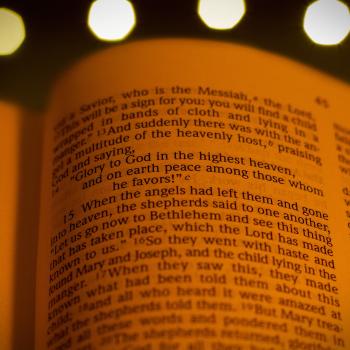 The Ruins of Formation
Kathleen Mulhern
4

About Elizabeth Scalia
Elizabeth Scalia is a weekly columnist at First Things.
Get Patheos Newsletters
Get the latest from Patheos by signing up for our newsletters. Try our 3 most popular, or select from our huge collection of unique and thought-provoking newsletters.
From time to time you will also receive Special Offers from our partners that help us make this content free for you. You can opt out of these offers at any time.
see our full list of newsletters