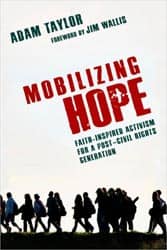 A New Dream for a New Generation

In January 2010 I attended a Dr. Martin Luther King memorial service at Alfred St. Baptist Church in Alexandria, Virginia. The youth of the church put on a theatrical overview of the civil rights movement to commemorate Dr. King's life and celebrate his legacy. . . . As I watched middle and high school students deliver speeches and act out scenes from the movement, I was filled with an overwhelming sense of hope. I felt as though the torch had been passed to a new generation of young people who understood the shoulders upon which they stand and the unfinished business that lies before them. Yet I wondered whether they fully grasped the degree to which the world had changed since the height of the civil rights struggle. There's a risk in overly memorializing and romanticizing the civil rights struggle in ways that get us stuck in old paradigms. Sadly, America's recent trajectory has led to an increasingly unequal, resegregated America while missing a window of opportunity to offer bold moral leadership in an increasingly integrated and interdependent world.

Hours after the 2008 election results were announced and Barack Obama was declared the winner, an exodus of people poured out onto the 14th Street corridor in Washington, D.C., in a revelry of spontaneous and exuberant celebration. I stood in the midst of this thronging crowd sharing hugs, high fives and fist bumps with random strangers from seemingly every racial and ethnic background. In that instant the crowd felt like a family reunion of long lost brothers and sisters. We stood on top of the hallowed ashes of a Columbia Heights and U Street neighborhood that had burned to the ground forty years earlier after news of Dr. King's assassination in Memphis reached the rest of the country. On the same ground destroyed by rage arose newfound unity and hope. Regardless of how you voted, that night was a poignant moment in America's history.

We shouldn't lose sight of the symbolism that just forty years earlier in 1968, America experienced a tragic turning point in its history. Dr. King's assassination in Memphis and Robert Kennedy's assassination in Los Angeles on the eve of a major primary victory derailed the civil rights movement's pursuit of the beloved community. A fervent dedication to nonviolent social protest and a vision of an integrated movement was replaced by the anger of black power and separatism. The Vietnam War diverted America's attention away from the struggle for economic justice, siphoning massive financial resources and taking the political wind out of the sails of President Lyndon Johnson's Great Society programs. American politics became increasingly divided along the lines of a culture war that also fractured the church, creating a greater divide between mainline and evangelical churches. Abortion, school prayer and family values became the rallying cry of a conservative religious movement, leading to the creation of organizations like the Moral Majority and Christian Coalition and causing a realignment in American politics around issues of values and personal morality. Meanwhile the free market became a new religion, with Reagan's emphasis on trickle-down economics and unbridled support for small government and deregulation.

Forty years later we face a new set of realities as our world has changed in critical ways. First is the alarming trend that the economy is characterized by increasing inequality and rising levels of poverty. The spoils of economic growth have been unequally shared, with minimal gains and rising strain on the bottom and middle. Market values have seeped into every aspect of our lives. The Great Recession that began in 2008 provides a potential kairos moment to reimagine and restructure our economy according to a new ethic aligned with the biblical notion of jubilee.

Second, we see a backlash to many of the programs that were set up to make amends for our tortured racial history. In the context of President Obama's historic election, many people have been quick to embrace a misleading myth that we have become a postracial America. An eroding commitment to both racial reconciliation and justice comes at our own peril, particularly as our nation's schools and neighborhoods resegregate along racial and class lines and our nation approaches a watershed moment forecasted for 2042 in which racial minority groups will be in the majority.

Third, we must grapple with the newfound reality that the challenges and threats we face are increasingly transnational in nature, whether it is global climate change, human trafficking or terrorism. These threats require bolder global leadership and greater international cooperation.

In order to pick up where the civil rights movement left off and take our nation on a different course, new wine or new paradigms are needed that fit our contemporary context and reality. Transformed nonconformists will need this new wine as old ones have become outdated. These new paradigms include (1) a jubilee ethic to help provide a moral compass for our economy; (2) a renewed commitment to racial justice and reconciliation that helps us live into an intercultural reality and (3) a foreign policy that practices and values global citizenship. A moral economy requires a renewed commitment to fighting poverty both in the United States and across the world.

The economy is in dire need of a new ethic that provides a moral compass to offset the danger of greed and the failures of market fundamentalism. A moral economy will also require reforms to our financial architecture and system. A renewed commitment to racial justice and reconciliation will require bolder investments in education, job training, fair wages, and so on, and healing the internalized racism that so often impedes progress. Finally, we need global leadership that prioritizes human rights, reforms international institutions and combats transnational threats.

-Adapted from chapter seven, "New Wine for a Changed World"