Undeterred from his passion for reform, Calvin took refuge in Strasbourg where under the influence of German reformer Martin Bucer, another influential reformer, he resumed his writing. He completed his Commentary on Romans (the first of his commentaries on every book of the Bible) in addition to a revision of the Institutes. Surprisingly, within only a few years, a new crop of city officials in Geneva emerged who eagerly desired Calvin's return. Apparently even Calvin's strictures beat the intervening anarchy. Calvin obliged but was hardly obliging. He immediately moved to incorporate church authority into city government by authorizing clerical involvement (his own) in municipal decisions, thus preventing any future expulsion. Then he reinstated his uncompromising moral code. By the mid-1550s, Geneva, now thoroughly Calvinist, became the Protestant center of Europe, a haven for banished former Catholics seeking sanctuary for their dissent. Eventually close to half of Geneva was comprised of these religious refugees. They adopted Calvinist thought and practice; and once the time came for their return home, they exported what they had learned such that Calvinism proliferated and eventually dominated the Protestant landscape.

Calvin adhered with unwavering vigor to the Reformation tenet of sola scriptura, or the Bible alone as the rule for faith and life. Historically, the core of Calvin's theology has been abridged into five points, each traditionally recalled via the acrostic TULIP. Total depravity holds that humans have been totally affected for the worse by sin. Unconditional election emphasizes that it is God alone who initiates salvation, and that this initiation is on the basis of no deserving human merit but solely by virtue of divine love and mercy. Limited atonement asserts that Christ's death only saves a particular number of people; namely, those chosen by God before the foundation of the world. Irresistible grace refers to the inability of a person to resist the Spirit's inward invitation to salvation. Those so internally wooed by the Spirit invariably respond affirmatively to the Gospel when presented to them externally. And finally, preservation of the saints declares that once a Christian, you're always a Christian. Since your salvation was and never will be dependent on anything but God's grace, you can no more lose it than you were able to attain it. (I consider myself to be a 3½-point Calvinist.)

Indisputably, the most disputed theological position Calvin held was his insistence on scripture's witness to double predestination: God creates some for salvation and creates others for damnation. However while those he elects he does so by his grace, those he damns he damns because of their sin. This disturbing doctrine did not originate with Calvin; the Catholic Church, Augustine, and Luther all ascribed to it in varying degrees. But Calvin most definitively articulated and defended it. Deduced from the absolute sovereignty and free will of God, Calvin utterly rejected any human contribution as far as one's salvation is concerned.

"By predestination," Calvin wrote, "we mean the eternal decree of God, by which he determined with himself [alone] whatever he wished to happen with regard to every man. All are not created on equal terms; some are preordained to eternal life, but others to eternal damnation; and, accordingly, as each has been created for one or other of these ends, we say that he has been predestinated to life or to death. . . . Scripture clearly proves this much, that God by his eternal and immutable counsel determined once for all those whom it was his pleasure one day to admit to salvation, and those whom, on the other hand, it was his pleasure to doom to destruction. We maintain that this [hidden, secret] counsel, as regards the elect, is founded on God's free mercy, without any respect to human worth, while those whom he dooms to destruction are excluded from access to life by a just and blameless—but at the same time incomprehensible—judgment. . . . God has always been at liberty to bestow his grace on whom he would. Wherever the good pleasure of God reigns, no good works are taken into account . . . God saves whom he wills."

In accordance with sola scriptura, Calvin cited evidence throughout the Bible. In Proverbs we read, "The LORD has made everything for his own purposes, even the wicked for the day of disaster." In John's gospel, Jesus declares, "You did not choose me, but I chose you and appointed you to go and bear fruit—fruit that will last." And again, "All that the Father gives me will come to me, and whoever comes to me I will never drive away." And famously in Ephesians Paul writes, "God chose us in Christ before the foundation of the world to be holy and blameless in his sight. In love he predestined us to be adopted as his children through Jesus Christ, in accordance with his pleasure and will—to the praise of his glorious grace, which he has freely given us in the One he loves."

"I Do What Jesus Has Me do. I Give the Glory to God"
Jonathan MS Pearce
3 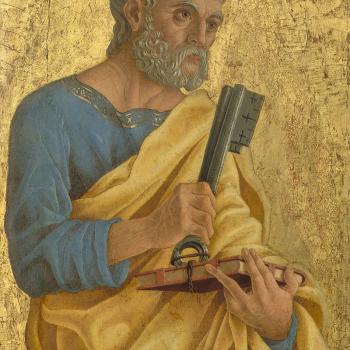 Standing on the Promises: Why Catholics believe Peter is the Rock
Edwin Woodruff Tait
4

Post 9/11: Christian Nationalism, the Global Church & Jesus’ Kingdom
Paul Louis Metzger
Get Patheos Newsletters
Get the latest from Patheos by signing up for our newsletters. Try our 3 most popular, or select from our huge collection of unique and thought-provoking newsletters.
From time to time you will also receive Special Offers from our partners that help us make this content free for you. You can opt out of these offers at any time.
see our full list of newsletters
Editor's picks See all columnists