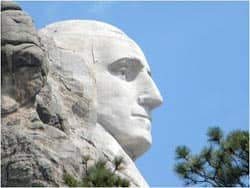 We need models of greatness and stature as we reflect on the role of political and religious leadership in our time. We need an antidote to the culture, political, and theological wars, the violent rhetoric, and the inability to find common ground for the well-being of our nation and the planet. We need to cultivate our own spiritual and political stature so as to honor great women and men of the past. Like Martin Luther King's holiday, Presidents' Day is not just a day to sleep late, but an opportunity to consider the meaning of greatness as it relates to our lives and the lives of others. All persons can embody stature, or spiritual greatness, in terms of their particular gifts, limitations, time, and place. Greatness is a matter of heart as much as intellect.

When most United States citizens think of political greatness, their attention turns to figures such as Abraham Lincoln, Franklin Delano Roosevelt, and George Washington. Though historians remind us of their imperfections, each of these leaders had political stature. Like Esther, a heroine of the biblical tradition, they realized that they came into leadership "for just such a time as this" and knew that their leadership skills and stature would be pivotal in the nation's emerging future and, possibly, survival. Despite the temptation to do otherwise, they placed the well-being of the nation ahead of their own parochial interests.

Stature is a word rarely used to describe our current generation of religious and political leaders. Perhaps, this is true of every generation. But, it is a goal toward which we all should aspire even as we recognize our own ethical and personal failures. One of my teachers, Bernard Loomer, spoke of stature as involving a largeness of spirit, able to embrace and place in contrast, rather than opposition, as much of reality as possible without losing our personal center and values. While our values may evolve and grow according to our historical circumstances, stature involves a breadth of vision that includes rather than excludes and that embraces rather than alienates. In light of the scorched earth approach to cultural, lifestyle, theological, and political diversity, characteristic of our time and embodied sadly by the left as well as the right, we all need to seek greater stature in our lives and expect greater stature from our political and religious leaders.

Stature emerges both from a strong sense of self and a personal vision, and an openness to grow through encountering other, often contrasting, positions. Stature emerges from spiritual centeredness in such a way that we can be: 1) committed to a position or belief-system that guides our decision-making and 2) flexible in responding to diverse viewpoints and behaviors.

Legend has it that toward the end of the Civil War when Northern victory was assured, Abraham Lincoln was asked, "How will you treat the Southern states when the war is over?" His questioner expected words of vengeance and threats of punishment. But, Lincoln is said to have responded, "I will treat them as if they had never left." Although he could be a shrewd politician, more than capable of dealing with the realities of political give and take, Lincoln did not choose to demean his presidential and political opponents, but rather gathered in his cabinet a "team of rivals" to guide the nation's destiny. Leadership is not about inflexibility or unilateral decision-making, but the stature that seeks as many sources of wisdom as possible, even criticism, in quest of the common good.

In the wake of the Tucson shootings, we need stature—and large spirited persons—in politics and religion. We need leaders who look toward the broadest perspective, who can transcend theology and ideology, who are willing to grow from embracing contrasting viewpoints, and who seek common ground in terms of what is best for the nation or church rather than immediate victory over those whom they deem theological or political opponents.

As we expect greater stature from our political leaders, we need to cultivate that same stature in ourselves. This is a matter of mindfulness and character, involving how we speak, act, and think. We can disagree without demeaning or polarizing. We can make a commitment to speak words of respect when describing persons with contrasting positions. We can choose a path that involves learning from diversity while deepening our own beliefs. And, we can choose the pathway of forgiveness and reconciliation while protecting our best interests and the interests of vulnerable persons.

Stature involves, in the broadest sense of the word, a commitment to grow spiritually in facing the complexities of life. We can, with Lincoln, follow our "better angels," seeking to have malice toward none. We can, following the wisdom of 20th-century theologian Reinhold Niebuhr, affirm the falsehood—or limitations—in our own truth, while looking for the truth, or value, in our neighbor's contrasting positions. Spiritual and political stature is a matter of recognizing that wisdom and insight are broadly scattered among human beings, and that no one approach is final nor is any perspective all-inclusive.

It is a matter of recognizing our own imperfections and the limitations of our beliefs and behaviors, while looking toward the best in others. It is a matter of recognizing the value of diversity in belief and practice as a way of finding the best possible solutions to the challenges we face. This involves ultimately treating our opponents with the same respect as we treat those for whom we seek justice.

This Presidents' Day, whether you visit the mall for a sale, sleep late, catch a movie, or spend extra time with friends, I urge you also to reflect on stature and greatness. How you can embody largeness of spirit in your life as you encourage our political and religious leaders to seek stature as well?