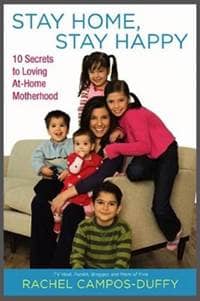 Though Rachel Campos-Duffy began her career in the public eye on MTV's reality series "The Real World: San Francisco" in 1994, she admits the network and media in general have traveled down a troublesome road during the intervening years. "There is a war, especially on young girls," said the mother of six children during a recent interview on the Christopher Closeup radio show. "There is a cultural pattern that is basically removing girlhood and pushing these kids into adolescence at a rapid rate. What's interesting about having an 11-year-old girl is being able to compare the cultural forces I was dealing with versus now."

Currently a stay-at-home mom and parenting blogger who recently wrote the book Stay Home, Stay Happy: 10 Secrets to Loving At-Home Motherhood, Campos-Duffy certainly doesn't believe in isolating yourself from popular culture. In fact, she's a frequent guest host on the ABC series "The View" where she freely voices her Catholic, pro-life beliefs. She also looks for positive elements in media, citing as an example some strong pro-life moments on the MTV series "16 and Pregnant" and "Teen Mom."

Campos-Duffy goes on to acknowledge that the program also has its down side because the featured teens "are basically shacking up in each other's homes in front of their parents."

Though her 11-year-old daughter isn't old enough to watch MTV, Campos-Duffy thinks it's important for parents to be aware of what's going on in popular culture for the sake of their kids: "I read about things because I feel that it's my job to filter as much as I can." She admits it's an uphill battle that often requires her to tell her children they can't watch a particular movie or TV show even though other parents allow their kids to do so. It helps if you "surround yourself with other families that share your values" and have conversations about why certain things are off limits. For instance, she doesn't let her kids watch "Hannah Montana," but used Miley Cyrus's public indiscretions as a jumping off point to discuss issues like young girls being influenced by a culture that tells them only their bodies are important.

Filtering the popular culture isn't enough though, because eventually kids will be confronted with it anyway. Dialogue, education, and faith-formation are, therefore, critical factors because they lay the groundwork for when that happens. Campos-Duffy explains, "If the foundation isn't there, if the confidence in one's faith and one's family is not there, (the kids) will sink. Often we'll see headlines and think 'Oh I can't believe these kids did this.' It's really important to have compassion because these kids are not coming out of a vacuum. There is a culture and a lack of family life and family values that is creating these situations. And I think they're screaming out to us that they want a family life."

Giving their kids a solid family life is the primary mission of Campos-Duffy and her husband, recently-elected Wisconsin Congressman Sean Duffy whom she met on the MTV reality series "Road Rules: All Stars."

His background as a county prosecutor, time spent on the campaign trail, and now work in Washington have kept Duffy busy and often on the road, yet Campos-Duffy admits that she couldn't do it all without his support. She explains, "I think probably the best thing he does is just come home from work and say 'thank you for staying home with the kids.' He understands that as much as he does, what I am doing is as difficult or more at times. That empathy and solidarity with your spouse is really important, but just as important is that [men like Sean] are ready to be involved. They want to be hands-on dads. I know Sean, in his generation, is not an aberration. There are plenty of men out there that are hands-on, that want to get involved in their children's lives."

The Duffy's Catholic faith is another critical component in building a solid foundation for their kids. The daughter of conservative Spanish Catholics, Campos-Duffy absorbed the faith from her parents' example even though she didn't notice it at the time; "When you're growing up, you don't really get it. It's not until you have your own kids that you realize those things really did take root."