Revisiting the "Moon": An Interview with Ben Whitmore

Editor's Note: Ben Whitmore is an Alexandrian High Priest, Co-Freemason, Morris dancer, artist, and software engineer. He is the author of Trials of the Moon: Reopening the Case for Historical Witchcraft, a critique of Ronald Hutton's Triumph of the Moon: A History of Modern Pagan Witchcraft. You can read an excerpt of his book on his website. He lives in rural Auckland, New Zealand, with his partner and daughter. 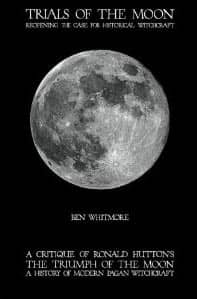 What prompted you to write Trials of the Moon?

I read The Triumph of the Moon on a friend's recommendation, and although I really enjoyed it, I found more errors than I was really comfortable with, and started to wonder what else might not be entirely accurate. It seemed like an extremely important book, and one that as a Wiccan I ought to study carefully; but I needed some expert guidance on what was solid, and where there might be potential pitfalls. But when I looked, no one else seemed to have even a single criticism of the book.

The one negative review I eventually found was by a fellow called Curtis Steinmetz, who didn't really go into details, but he did give excellent pointers for further research. I also found a critique of Hutton's earlier book, Pagan Religions of the Ancient British Isles by Max Dashu, who runs the Suppressed Histories Archive and the Veleda blog. Together these gave me the moral encouragement to keep looking, and feel that I wasn't just deluded.

I'm a great believer in not waiting for someone else to do a job you think needs doing, so I set out to write what I had been searching for: a brief review of Triumph, laying out some key errors. The project ended up taking nine years on and off the backburner, often on stolen time in the wee small hours, and my review grew into a book-length critique. I learned quite a lot about history in the process.

What did you hope Trials of the Moon would accomplish?

At first, I hoped it would make Triumph a more useful resource for pagans and Wiccans. As I started talking with others about what I was doing, though, I discovered that Triumph had become something of a cult, and I risked getting a dressing-down for even questioning it. A fairly typical response was condescension followed by condemnation, and being told that I obviously hadn't read Hutton very carefully, and only fluff-bunnies still cling to the old myths. Pointing out that I wasn't clinging to the old myths didn't seem to make any difference. In fact, "Wicca" seemed to be turning into some sort of derisive joke, with "Ronald Hutton" as the punch line. Some people were quite vicious about it. I started to feel that my critique might help restore some dignity to the Craft, and turn Triumph back into just a book; a book with no greater claim to infallibility than any other.

You feel that Hutton prematurely closed some doors of inquiry. If those doors never yield anything definitive regarding the history of religious Witchcraft or pagan survivals, what do we gain by leaving them open and continuing to explore the possibility of a historical Witchcraft?

I value truth and accuracy, and to say that something is not possible when it's actually entirely possible, even likely, and in some cases demonstrated fact, that doesn't sit right with me. That's not history, it's myth-making. And even though some questions will never yield definitive answers, we don't yet know which questions these are, and we never will know. We can't just whitewash over problem areas of history for simplicity's sake.

But I actually think there's a lot of low-hanging fruit, a lot of questions that could be resolved in the near future by the right person armed with the right information. And the balance of evidence so far points in quite different directions from where Hutton has led us. I feel confident that this whole field of history will continue to open up and bear a lot more fruit. I don't think I'm just grasping at straws.

Now, the other thing we gain by leaving the doors open is freedom to pursue our beliefs without ridicule. By this, I don't mean we suspend critical reasoning and believe whatever takes our fancy. But history looks a bit different to some of us, as a result of our experiences. For example, many witches and Pagans have had experiences with things like clairvoyance, telepathy, spirit travel, and communication with the dead, and to us the old myths, fairy-lore, ballads, and folk traditions seem highly familiar and relevant. We recognize the other-world territory they occupy, because we've been there ourselves.