Thinking Shall Replace Killing: A Short Look at a Pagan Model of Ethics 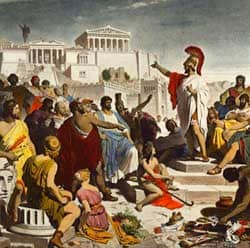 The birthplace of ‘Western' civilization is generally agreed to be Greece, and its birth date is generally agreed to be some time during the 6th century B.C.E. Obviously there is not one single dramatic moment that definitively started the whole thing. It was a sequence of related yet distinct events in which one Greek community, Athens, transformed itself from an independent city-state, into the leader of a ‘league' of allied city states. Then it transformed itself again into the head of an international empire.

Somewhere in this process, Athens also discovered its artistic and intellectual genius. Through the leadership and diplomacy of Pericles, various Greek cities entered into contracts with Athens, in which Athens would protect all of them from Persian attack. In return, Athens would receive a money tribute from all of the cities under its protection. But Pericles diverted some of the money away from the war effort and into architecture, sculpture, theatre, music, and the arts. As noted a generation later by Plutarch, one of his biographers:

[Pericles] was also anxious that the unskilled masses, who had no military training, should not be debarred from benefiting from the national income, and yet should not be paid for sitting about and doing nothing. So he boldly laid before the people proposals for immense public works and plans for buildings, which would involve many different arts and industries and require long periods to complete, his object being that those who stayed at home, no less than those serving in the fleet or the army or on garrison duty, should be enabled to enjoy a share of the national wealth.

Pericles also established competitive music and theatre festivals, and created for Athens a great reputation as a center of the arts, which it held for many centuries. It is worth adding that, in Plutarch's account, Pericles transformed Athenian society this way not primarily by force of arms, but also by force of words. Even his opponents acknowledged his mastery of oratory and rhetoric. Reading between the lines of his biography one gets the impression he was a master psychological manipulator as well. Athens was a democracy, and Pericles had to be elected every year. But as Plutarch says, Pericles was re-elected for forty consecutive years. He preserved his position by creating a reputation as an honorable and selfless person, concerned with the glory of Athens as a whole and not just his own personal glory. This point was also noted by Thucydides in his account of Pericles' famous Funeral Oration. Plutarch also emphasized that Pericles was unmoved by bribery and never enriched himself personally from the public treasury.

Plutarch's portrait of the man veritably drips with worshipful adoration. It's almost embarrassing to read it. But I think there is an important observation to be found in it. Athens, in the time of Pericles, became a society in which artistic and intellectual activity became at least as culturally important as military victory. Thinking was beginning to replace killing as a social force. This shift, as we shall see, is a major part of the meaning of civilization.

It is not only in Greece that this idea emerges. It is, I believe, an elemental idea, which anyone can discover. The phrase ‘thinking shall replace killing', as I have used it here, comes not from the speeches of Pericles but from the story of Deganawidah, the Great Peacemaker who established the Iroquois Confederacy. The birth of Deganawidah was prophesied to his mother by a messenger from the Great Spirit and he was born to her while she was still a virgin. He was surrounded by miraculous signs, such as a tree that would bleed human blood if his mission failed, and his canoe, made of solid stone, which floated perfectly. But the moment in his life that I regard as the most important is his meeting with the first person who accepted his message of peace: a woman who pressed him to describe how his peace message would be translated from theory to practice. He answered by saying that the Great Peace:

. . . will take the form of a longhouse in which there are many fires, one for each family, yet all live as one household under one chief mother. Hereabouts are five nations, each with its own council fire, yet they shall live together as one household in peace. They shall be the Kanonsiónni, the Longhouse. They shall have one mind and live under one law. Thinking shall replace killing, and there shall be one commonwealth."

The message of the Great Peace, that ‘thinking shall replace killing' as a means of social decision-making is a universal one. And like the great philosophers of Europe, its universality is asserted on the basis of Reason. One of Deganawidah's followers asked him what people who accept the great peace will be like. The Peacemaker answered: