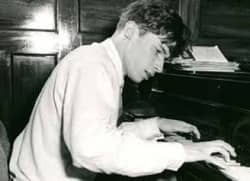 Although it has become a somewhat sappy and romanticized notion, the individual artist really does pose a threat to all totalitarian regimes. The romance should not take away from the reality of the artist's power. Yosif Feyginberg's 2002 documentary Glenn Gould: The Russian Journey provides a concrete example of that power in action. In 1957, a 24-year-old Canadian virtuoso pianist named Glenn Gould visited the Soviet Union on an official mission of cultural exchange. Gould's presence made such an impact among the Russians who heard him play that, fifty years later, Feyginberg is able to interview people for whom the encounter with Gould is still one of the most significant events of their life.

A theatre director named Roman Viktyuk describes a packed house in Leningrad, waiting for Gould to arrive: "The place was full of people. Everyone here was expecting a miracle." That expectation was already subversive; miracles weren't supposed to be necessary after the Revolution. Vladimir Tropp, a pianist, adds: "Gould was the first to reveal this world to us. The Berlin Wall existed in music as well, and perhaps Gould was one of those who were breaking that wall." Another fan confesses that "we started to live by each recording of Gould." The Russians who heard him play began to love Gould more than the Revolution.

The power of the artist before a totalitarian state is a central element in Florian Henckel von Donnersmarck's Academy Award winning film, The Lives of Others. Hailed by everyone from Roger Ebert to the Village Voice to William F. Buckley, the film takes place in the East Germany of 1984 and centers on the moral transformation of Captain Gerd Wiesler (Ulrich Mühe), a straight-edge, true-believing son of the Revolution and an agent of the Stasi, the communist secret police. A grubby minister of culture named Bruno Hempf (Thomas Thieme) has ordered Wiesler to tap into the life of Georg Dreyman (Sebastian Koch), a playwright who happens to be the lover of an actress whom Hempf is secretly, obsessively pursuing. Hempf wants Wiesler to uncover some pro-Western and counter-revolutionary dirt that he can use to destroy Dreyman and take the actress for himself. Albert Camus reminds us that there are crimes of passion and crimes of logic, and in this case, passion (Hempf) and logic (Wiesler), both evil in their own way, are united in a common cause, the persecution of Georg Dreyman. In the course of the film, however, Wiesler will change; he will betray the Revolution and he will save Dreyman from conviction and arrest.

What causes Wiesler to change is not argument, but beauty. He is moved to tears when he hears Dreyman (through hidden microphones) playing a piece titled "Sonata for a Good Man" on the piano. Dreyman plays the piece in mourning after he has heard that a close friend committed suicide. Wiesler also pilfers one of Dreyman's books—an anthology of Bertolt Brecht's poetry—and reads with wonder, his eyebrows raised heavenward for the first time. Apart from art, Wiesler is also touched by the artists themselves: by Christa-Marie, the coveted actress, and her struggles with addiction and artistic insecurity (not to mention Hempf's disgusting sexual advances); by Dreyman's problematic balancing act between his loyalty to the GDR and love for his subversive friends (among them, the director who commits suicide). It doesn't happen abruptly, but Wiesler changes—he "loses faith in his ideology," as von Donnersmarck explained to PBS's Charlie Rose. By the end of the film, Wiesler has secretly subverted Hempf's commissioned investigation of Dreyman. He has abandoned ideas—destructive ideas—for a pair of human faces.

Captain Wiesler's change is the dramatic axis of this film. A.O. Scott of the New York Times disagrees with this interpretation. Scott concludes his generally positive review with the assertion that "the film's deepest, most challenging paradox" is that "people don't change, and yet the world does." When an interviewer from a British online magazine asked von Donnersmarck whether he agreed with Scott's judgment, the filmmaker replied, "I wouldn't. I was a little surprised by that. But I supposed it depends on what you define as change." And yet The Lives of Others has been so widely praised by such a diverse array of critics and publications that it would be hard to imagine all those encomia coexisting peacefully. More disturbing is that a few of the film's admirers are threatening the very integrity of the work they admire by putting into question the believability of Captain Wiesler's transformation.