Alms Are the Arms of Christ

While giving alms may sometimes require contributing what has been earned through human labor, the gift of oneself is of greater value. After all, the debt incurred by sin wasn't paid in the currency of the world but in the flesh of Christ. ~ Fr. Gary Caster, The Little Way of Lent

Giving alms is a part of our lives; as believers—out of thanksgiving to God and for love of his people—we share what we have with the less fortunate. However, we are exhorted not to do it in a way that calls attention to ourselves, to gain honor for its own sake (Mt. 6:1-4). Giving money to worthwhile charitable causes is necessary, especially when we can't physically be present to help in a situation. Putting "feet to our faith," with practical giving of ourselves is also a way of giving alms when it is in our power to do so. All of us can do something.

There was a woman who was bedridden and she realized she could use her bed as her "chapel," in which to pray. That made her feel useful, and her prayers were a very powerful giving of herself for others. I can't as a blind person drive someone to a doctor's appointment for instance, but I can cook meals, volunteer, and I can always pray.

I know a little—or more than a little—about being on the receiving end; it is humbling, and it makes one so grateful. This week, on March 30 I will celebrate the 4th anniversary of my live kidney transplant from our friend Rich. This gift of life was the miraculous conclusion to a 3½-year wild rollercoaster ride. During those very difficult years, we were blessed by family, friends, and by the prayer support of people we have never met. We don't know how we would have gotten through this time without their help.

In the fall of 2003 I began to get very ill, and went on dialysis for renal failure. Our friend Mary offered her kidney, and as we were a "match," I received her kidney transplant in June of 2004. Thankfully, all went well for both of us. After recovering, in February of 2005 I was blessed with a pancreas transplant. Wow, things were great! For the first time in my life I felt really healthy! However, after that transplant they put me on a newer immune suppression medication (which is no longer used), and that drug overly suppressed my body. I had almost no immune system to fight off any of the several very serious viruses that began to attack my system.

I eventually lost the kidney transplant due to BK virus, and also contracted CMV, which was almost fatal. I was back on dialysis, and not doing very well. With CMV, I was passing out every time I tried to stand up. One of those times Ed tried to catch me as I fell, and the next morning I was admitted to the hospital. Several days later I was released, but our son had to check Ed into a different hospital for back surgery. Ed had ruptured a disc when he had tried to catch me. We were in quite a pickle! For the first time in our marriage neither of us could take care of ourselves, much less each other! Family members flew out from California on short notice to take care of both of us for two weeks. We are so thankful for family members taking turns a week at a time to be our "rescue team."

For the first few days of our at-home convalescences, Ed and I hardly saw each other. I was on oxygen in our bedroom on the top floor, and Ed had to be downstairs in his recliner even to sleep. Our family members were running between floors to take care of us. Now—on the other side of these events—we can joke, referring to this time as our "Murphy's law summer"!

But looking back, we realize we appreciated the simplest things; after I felt a little stronger, with the help of friends, just being able to grocery shop was an outing! Toting my oxygen tank, and shuffling in my slippers, which were the only things I could fit on my swollen feet, I went to the store. I must have been quite a sight, but it lifted my spirits just to do something normal!

We are the Family of God. Jesus said, "As I have loved you, so you must love one another" (Jn. 13:34). A prayer that is attributed to St. Teresa of Avila was set to music several years ago by John Michael Talbot, and sums up this idea of giving ourselves as living alms:

Our alms, our charity—our giving of ourselves in any way, even with our vital organs—our reaching is always in support of Christ, an extension of his blessing upon us all. 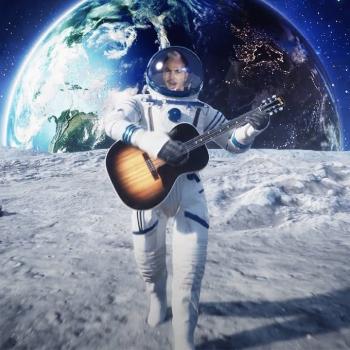 INSURGENCE - My Signature Book on the Kingdom of God (Interview)
Frank Viola
Get Patheos Newsletters
Get the latest from Patheos by signing up for our newsletters. Try our 3 most popular, or select from our huge collection of unique and thought-provoking newsletters.
From time to time you will also receive Special Offers from our partners that help us make this content free for you. You can opt out of these offers at any time.
see our full list of newsletters
Editor's picks See all columnists