Blueprint for Living, Part One: A Lenten Series on the Sermon on the Mount

Editor's Note: This is the first in a series of Lenten reflections on the Sermon on the Mount. To read an introduction to the series, click here. 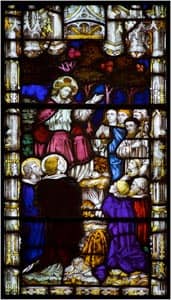 Raising the Bar!
Matthew 5:21-42
In this important section of the Sermon on the Mount, Matthew groups together a series of teachings called the six antitheses, all dealing with ethical behavior and the concept of righteousness. First, Jesus introduces a moral command, e.g. not to kill, lie, or commit adultery, and then follows it with even more demanding requirements. It is soon obvious as one reads Jesus' ethical teachings that living by these moral instructions will certainly exceed the righteousness of the Pharisees. Throughout these six antitheses Jesus reveals his high expectation for moral goodness, one that must completely permeate one's actions, words, thoughts, and motives.

In raising the bar of moral goodness, Jesus does not simply expand each issue by adding more legalistic regulations. His new form of righteousness demands that we take the moral issue to a deeper level. To the commandment not to murder, Jesus points to the anger behind such action, and insists that anger not rule our words or actions. Nor would Jesus condone allowing such ill feeling to smolder within us. Rather, such anger should be dissipated or extinguished through repentance, humble acts, and reconciliation.

In the passage on adultery, Jesus expands the scope of the law to cover not only outward actions but also inner thoughts. Now the lusts of the heart and not just the actions of the body are accountable to God. Jesus will not be satisfied by the avoidance of adulterous acts. The root causes for adultery rest in the realm of the mind and heart, a realm only completely discernable to God. Jesus knows that evil thoughts may well lead to evil actions. What is different here is that Jesus anticipates our evil thoughts and longings and offers his ethical warning and judgment against them. Jesus calls into question our impure thoughts and motives even before they can fully express themselves outwardly.

Many years ago President Jimmy Carter in an interview by Playboy Magazine admitted that he had "lusted." It was a more prudent time then. Some people were incensed by his comments. If they were honest with themselves, most were not shocked that President Carter actually lusted. How many men can claim to have never had a single lustful thought? Rather, they were offended that he would be bold and honest enough to admit his lust publically. As a devout Christian, President Carter was not being self-righteous and indignant of those who had broken the marriage vow. Rather, he was confessing that he was certainly not morally pure in that regard. What he had not done with his body he had done with his mind and heart.

One of the more troubling texts of the Sermon on the Mount is the one containing Jesus' comments on divorce, found in Matthew 5:31-32. I will not try to unpack the full meaning of this difficult passage, but I will take exception to those who use Jesus' words about divorce to condemn divorced people or forbid them to remarry. The focus of Jesus' words was not an indictment against divorced people. Indeed women were often the victims of a husband's ungrounded divorce. Nor do I believe Jesus' words were meant as a condemnation of those who marry a divorced person.

Rather, Jesus' focus was on the covenant of marriage itself, asserting that it could not be easily or frivolously abolished by human action. Instead, it should be treated as a true covenant under God. If after reading Jesus' words, we are led to treat divorced people with harsh judgment, it seems to me we are making the breaking of a covenant an almost unforgiveable sin. Perhaps we need to be reminded that our Hebrew ancestors broke God's covenant many times (a covenant arguably equal or greater than the covenant of marriage). Yet God offered forgiveness to those who were unfaithful to the covenant.

As we contemplate Jesus' words on divorce, his words about adultery and lust should still be fresh on our minds. We should be less concerned about God's judgment on those who are divorced and more concerned about Jesus' telling words that those who lust are thereby guilty of adultery. Indeed, with all who have broken the covenant with God and all who have lusted, who then is left to throw a stone at the divorced?

For all of the articles in this series, refer to Pastor Tull's author page.