Blueprint for Living, Part Three: A Lenten Series on the Sermon on the Mount

Editor's Note: This is the third in a series of Lenten reflections on the Sermon on the Mount. To read an introduction to this series, click here. 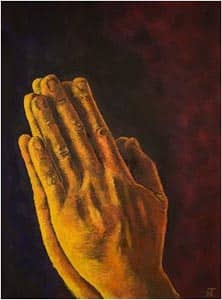 Hidden Piety!
Matthew 6:1-18
In this next section, Matthew has collected sayings of Jesus concerning our acts of piety: praying, almsgiving, fasting, and giving. In almost every case Jesus recommends a hidden piety, in sharp contrast to the showcase piety of the day with its ceremonial almsgiving, public praying, and prideful fasting, a practice made easier because the Pharisees were so full of themselves. Jesus suggests the rather extreme measures like praying in the closet and anointing the face while fasting so as to disguise the practice. These secret acts of piety were not new rituals of righteousness. Rather, they a means of protecting the spiritualist from moral pride or even worse, righteous indignation against others who are not as "spiritual" as they are.

But we would be mistaken if we suggest that Jesus is endorsing personal piety, a kind of do-it-yourself and do-it-by-yourself spirituality. The command to hidden piety in this series of teaching is directed not at to those who desire to be good, but primarily to those pretending to be better, and to do so by demonstrating their goodness through outward acts of piety.

Consider for a moment that Jesus has already entreated us in Matthew 5 to let our lights shine. Now he seems to be asking us to hide our piety under a bushel, or in a closet. The difference in the requested behavior lies solidly with the purpose for our acts of piety. Jesus warns the hypocrites that they are wrong not by virtue of the acts themselves but by their motives. They are seeking not to honor God, nor is God even their audience. They are seeking to honor and glorify themselves and to do so for the praise and admiration of all those who witness their greatness. But in contrast, in Jesus' plea for us to let our lights shine the final outcome is not self-glorification but something quite different: "that they may see your good works and give glory to your Father in heaven." Jesus suggests that if we are tempted to do acts of piety to been seen by others, it is best we do them entirely in secret.

For the most part, the particular sinfulness of the hypocrites, which Jesus addresses in these teachings, is all but absent in today's society. As a western culture we are not big on outward piety, or inward piety for that matter. We are careful not to look too religious to others less they call us religious fanatics or hypocrites. Perhaps our shortcoming is that we hide our lights under a bushel, withhold any kind of public witness, less others hold us to a higher level of goodness. Instead of just keeping our piety secret, we tend to keep our whole religious life secret, unwilling to share our faith except in the more safe environments of a small group or close friends.

But within this section on religious piety, in its very center in fact, Matthew places the Lord's Prayer. The prayer itself, a model prayer, is not in keeping with the other passages that stress private, individual, and secret piety. In fact the Lord's Prayer should make Jesus' position crystal clear: Christianity is not to be private or merely personal; it is to be communal. The Lord's Prayer does not suggest a private soul praying alone in the closet but rather an individual Christian inseparably joined with other worshippers and inseparably linked to the neighbor who is awaiting our forgiveness. We should never forget that the Father, to whom we pray, is not our sole possession, not one who is ours by virtue of our goodness; he is our Father, a God shared with everyone, even the neighbor in need and even the enemy we are prone to despise.

This passage remains relevant for today's Christian, in spite of the relative absence of fasting and public praying, because it continues to remind us as Christians that true goodness rests not on the outward actions, however religious in their appearance, but in the matters of the heart where only God knows our feelings of compassion and where only God sees our willingness to forgive.