"But I Have Nothing to Confess" 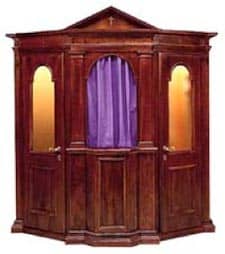 After the death of Dr. Bernard Nathanson last February, we were reminded that somebody once asked him why he became a Catholic. Because, said Dr. Nathanson—who'd been a leader in the movement to legalize abortion and performed or presided over many thousands of abortions, then seen the light and become ardently prolife—no other religion provides as much opportunity for forgiveness as the Catholic Church does, and he had a lot to be forgiven for.

Bernard Nathanson was a realist. What about the 75 percent of American Catholics who, according to polls, receive the sacrament of penance less than once a year or never? Escapists perhaps?

This year as in other recent Lents, dioceses and parishes across the country are making a push to get Catholics back to this neglected sacrament. I wish them much success. The flight from sacramental penance has been one of the genuine disasters of contemporary Catholic life.

What explains it? Many things undoubtedly combine to play a part: an often-cited loss of the sense of sin, fatuous presumption that God approves of me no matter what, shame at the prospect of confessing one's sins after a long time (give it a try: it won't hurt). But part of it, I feel certain, has to do with contraception.

It works this way.

Last time I looked, the surveys were reporting that something like eight out of ten American Catholics said they thought contraception was okay and the Church was wrong about it. Obviously this includes many of childbearing, child-rearing age who are practicing contraception now.

As far as the sacrament of penance is concerned, these people don't want to confess contraception because they believe—or anyway say they believe—it isn't wrong, and they don't care to give it up. But they don't want not to confess it since they know perfectly well that the Church says something different, so not confessing would be, well, kind of dishonest. The non-solution to the dilemma is not to receive the sacrament at all. Which is where we are now.

I have no easy remedy for this situation, but one approach that might help a bit is to present the sacrament of penance not so much as an obligation but, as Bernard Nathanson understood, a marvelous opportunity: a chance to get rid of one's burden of objective guilt and start over again with a forgiving God.

As for those who may be somewhat more advanced in the interior life but who've neglected penance for whatever reason or combination of reasons: bear in mind that contrition and penance are closely linked to conversion and all but indispensable to it. All three go together to make up a complex, continuing process of lifelong growth in the Christian life—a process that necessarily includes awareness of one's sins, a healthy sense of guilt, and the desire to be forgiven.

The first letter of St. John says it best: "Sin is with us; if we deny that, we are cheating ourselves; it means the truth does not dwell in us. No, it is when we confess our sins that [God] forgives our sins, ever true to his word, ever dealing right with us, and all our wrong-doing is purged away.

If we deny that we have sinned, it means that we are treating him as a liar; it means that his word does not dwell in our hearts" (1 Jn. 1:8-9).

Sometimes people say they don't go to confession because they have nothing to confess. Tell that to St. John!