Cultivating a Holy Imagination: An Interview with Michael Card 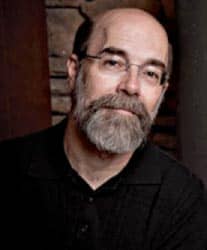 In his latest book, Luke: The Gospel of Imagination, singer-songwriter Michael Card invites us to journey through scripture with the imagination, as well as the intellect. Here, jazz musician Deanna Witkowski talks with Michael about his imaginative approach to scripture, the relationship between music and faith, and some of the central passages from Luke that are brought to life once again for both musicians in the writing and reading of this book.

Visit the Patheos Book Club to read an excerpt from the book, and reviews by musicians and artists.

Your concept of the "informed imagination" made me think a lot about St. Ignatius. I became Catholic a couple of years ago, and read a lot about Ignatius's spiritual exercises, such as the idea of placing yourself inside the context of a gospel story, or identifying with a specific character. Was the "informed imagination" an idea that you specifically heard from Bill Lane [Michael's former teacher and mentor at Western Kentucky University], or from others as well?

That really came from Bill. Bill was so widely read that I don't doubt that he might have been affected by Ignatius. He was the kind of guy who went to Linz, Sweden and read Philo in Greek for eleven years—he read everything.

I had to go back and do my homework and see where the King James mentions imagination. Interestingly, in both the Hebrew and the Greek, the word is heart—"the reasonings of their heart." There's no word for "imagination." It's either cardia in Greek, or the Hebrew word lev, which is the word for heart. My response [to those who are concerned about the King James' mentioning imagination in a negative way] is, "You're right to be concerned if the imagination is evil, but the Bible is talking about the heart. Don't you think we're supposed to use our hearts? Are our hearts not involved? Our hearts are definitely sinful, but is God not redeeming our hearts? Is that not what scripture is all about?" People tend to soften at that point.

A lot of times I get questions from people such as, "How can you be a jazz musician and a Christian?" That seems to also go with imagination.

Absolutely. Kirk Whalum is a very good friend of mine. He'll have someone read a verse of scripture and then he basically plays it—he improvises the verse on his saxophone. We did a worship service once that lasted for three hours. I was sitting next to a minister who turned to me afterward and said, "What just happened?" He couldn't put words to it, but it was Kirk just doing his thing.

I do, too. I can't do that musically—I'm a folk guy. It's three verses and a chorus for me.

Do you find as you're putting the Luke stories into music that thinking about the stories and writing the songs brings head into heart?

It does. And for me, it comes out with words. The music is the hard part. What happens is the informed part of your head—the knowledge, the facts—keeps asking, "what do the facts mean?" and for me, the facts always relate to my heart. Imagination is this bridge between your head and your heart. It's the pathway that the Holy Spirit crosses back and forth on.

I always think of the shema from Deuteronomy 6 that talks about loving God with all your heart, mind, soul, and spirit. It begins with shema, which means "hear" or "listen." You really start listening to the text . . . and I think that's what jazz people do. Jazz people listen in different ways. You guys listen in a whole different way than we listen. That's something that I don't think I would have gotten unless I knew Kirk [Whalum] personally.

Did you feel that this point of time was specifically right for the Biblical Imagination series? Has this idea been coming for a long time?

I've been doing it in one way or another for a very long time. I'm the Wednesday night Bible study guy at our church. We'd done Luke over a very long period of time, and so Luke just sort of naturally happened. I'd just written a book on slavery and a big part of Luke's story is that I think he was a slave, so I was kind of geared up information-wise. I started hearing Luke. For me, there comes this point when you get saturated enough with a text that you begin to hear it. I can hear Luke's voice; I can hear John's voice. I can't do it with Mark yet, and I don't know if I'll ever do it with Matthew. I can hear Luke's voice when I read the text. I hear the inflection; I hear what's important to him. Of course, that's my imagination—that's not an absolute thing. What may be important to me may not be as emphatic to you when you listen to it.