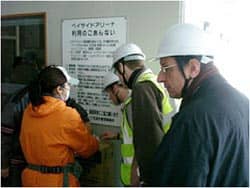 Since its "opening" in 1854 by U.S. Navy Commodore Matthew Perry, Japan often has been defined in the West by a single, simple image.

Sometimes that image has been one of exotic, romantic tradition (a samurai or a geisha); sometimes it has been the image of technophilic hypermodernity (a bullet train or a robot). Over the past week, Japan has been visually defined in television and online news accounts by the imagery of disaster: flooded fields and streets, bodies and vehicles washed ashore, nuclear power plants exploding, and houses afire.

Disaster looms large in the Japanese cultural imagination. Even casual consumers of Japanese media are aware of the nation's appetite for apocalypse, as seen in films from 1954's Gojira (Godzilla) to 2006's Nihon Chinbotsu (Japan Sinks), not to mention anime (cartoon) and manga (comic book) series such as Akira and Sunabōzu (Desert Punk). What the average Godzilla or anime fan may not realize, however, is how deeply rooted Japanese perceptions of disaster are in traditional Japanese religious culture.

In traditional Japanese religion (not only Shintō but also forms of Buddhism as well as hybrid and new religious movements), kami (deities) are entities of great power and unpredictable, even nonexistent morality. As the influential religious thinker Motoori Norinaga (1730-1801) wrote:

The changing of spring and fall, the falling of rain and tempest of wind, all things good and evil which may befall men and lands, one and all are the doings of the kami. . . . Among the kami are good and evil, and their doings are likewise in accord with that nature. . . . When provoked, a good kami may erupt in rage, while evil kami may soften their hearts when happy, and it is not entirely inconceivable that they might even bestow blessings on humans. And although people may not realize it, the actions [of a kami] which may at first be thought evil, in fact turn out good, while those first thought to be good, may in fact turn out evil.

Many a Japanese apocalyptic drama or disaster movie has perpetuated this ambiguous concept of the sacred. Much like kami, Godzilla has been depicted as both an agent of destruction and a powerful protector who both menaces and saves Japan, depending on the film in question. Interestingly, in the original Godzilla film, nuclear radiation is said to have been responsible for creating the mutated prehistoric menace that is Godzilla, while in Japan Sinks, nuclear warheads are used to detonate portions of sea floor, thrusting the flooded Japanese islands back up above sea level. Thus, whether one speaks of supernatural figures, fictional monsters, or contemporary technology, power in Japan is cloaked in moral ambiguity, and it ultimately teaches human beings important lessons about the limits of their own power as well as their own hidden resources.

Unlike practitioners of Western religious traditions such as Christianity, Islam, or Judaism, who may struggle with why a good God would permit evil to exist, traditional Japanese religious communities have tended to turn such moral reflection inward. Instead of asking why disaster occurs or whether it confirms divine justice, one often hears those influenced by Japanese religious traditions asking how they should respond to disaster and how that disaster might lead to self-cultivation and self-transformation. Phrases customarily uttered by Japanese during moments of crisis, such as gaman ("putting up with it") and ganbatte ("do your best!"), reveal the faith that they often place in the healing and redemptive power of suffering as an occasion for both the strengthening of collective bonds and the development of personal character.

The ideas, institutions, and practices associated with Confucianism and Buddhism, in particular, reinforce the notions that individuals exist interdependently with others as members of a group and that people carry within themselves deep wellsprings of spiritual potential that can be actualized through self-effacing behavior and collective discipline. In medieval Japan, the experience of disaster both confirmed people's sense that they were living in the era of mappō ("decline of the Buddhist teaching," a degenerate period in which salvation was increasingly difficult to attain) and encouraged them to seek relief in either the tariki ("other-power" of merciful beings such as Amida Buddha) or the jiriki ("self-power") of their own latent Buddha-nature. Either way, disaster could be transformed into an opportunity for cultivating one's gratitude and fortitude in service to others.

About Jeffrey Richey
Jeffrey L. Richey is director of the Asian studies program and associate professor of religion at Berea College in Kentucky.