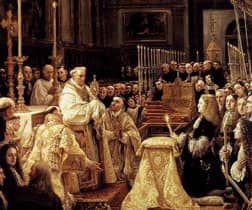 Have you heard? "God hates religion." That's what a friend told me recently, with what I thought was unwarranted confidence.

Surprisingly for some of us, she's not alone in her thinking. Here at the tip of the Bible Belt, in North Carolina, that conviction seems to be more common than it was when I lived within earshot of the mission bells along California's "El Camino Real."

The "religion is evil" narrative tends to be spoken with a curled lip turned toward Vatican City, so for the sake of space, let's just look at Christianity. Influential American pastors in the Reformed Christian tradition like Mark "Mars Hill" Driscoll say the same thing my friend did; when they talk about people calling themselves "spiritual" rather than "religious," the "God hates religion" card gets played.

For Driscoll and pastors of his ilk, the key piece of evidence for their claim is that Jesus criticized the legalism and hypocrisy of the Pharisees, who were the most self-consciously religious and dogmatic people of his day. Protestants of the "low church" persuasion blend the Pharisees with Martin Luther's anger into a fog, until it seems to them that "organized religion" does more to obscure God than to reveal Him. In well-intentioned efforts to set the rest of us straight, they then proclaim that "Christianity is not a religion; it's a relationship."

That's a clever formula with a questionable premise, because it can only be true if "religion" and "relationship" are mutually exclusive terms. The problem, of course, is that they're not.

When people talk about religion, they usually mean both "the service and worship of God" and "an institutionalized system of attitudes, beliefs, and practices." The second definition draws more fire than the first, especially from people who see institutions as impediments to the gospel rather than caretakers for it.

My rebuttal to this kind of thinking starts with a well-known paraphrase of John 13:35: If "they'll know we are Christians by our love," then beliefs and deeds go together; "religion" and "relationship" are two sides of the same coin, at least where Christianity is concerned. Thinking that religion and relationship must be at odds with each other is like thinking that a caterpillar and a butterfly are from two different species, rather than from two different stages of the same species.

People who are down on religion see it as legalism that opens the door to priestcraft, which lowers property values in their spiritual neighborhood by inviting Catholic bishops to show up with man-made rules in tow, a notion as distasteful to them as seeing leather-clad members of a motorcycle gang dismounting from choppers parked on their lawns.

Fortunately, there is no empirical foundation for fears like these, and no reason to think that religion and relationship oppose each other. Per such works as the Westminster Confession of Faith and John Calvin's Institutes of the Christian Religion, even skeptics weaned on distrust for ritual often take creeds to heart. Those Christians for whom the word "creed" sounds authoritarian have the same religious impulse the rest of us do; they simply sublimate it by writing mission statements for their churches.

The Bible study leader who told me that God hates religion sought to reinforce her point by saying that the word "religion" appears seldom in scripture. Neither one of us, however, knows Greek or Hebrew, so we were each working from English translations of the Bible at the time; whoops!—the online version of the Merriam-Webster dictionary says the first known use of the word "religion" in English dates back to the 13th century, which is well after the canon of scripture had already been ratified by religious authorities.

Frankly, metaphysics gets further in quests like this than etymology can. Think about the religious impulse and who put it there. If God hates religion, he has a very peculiar way of showing it. Yes, the prophet Amos quotes the LORD as saying "I spurn your feasts; I take no pleasure in your solemnities." God also says "Away with your noisy songs! I will not listen to the melodies of your harps." Unfortunately, the proof-texting crowd usually stops there, before God tells Amos (and through him, the whole people of Israel) that what's needed with respect to religion at that time is a "mend it, don't end it" approach, because "If you would offer me holocausts, then let justice surge like water, and goodness like an unfailing stream."

Obviously the problem, when there is one, lies not in religion as such but in the unconverted hearts of people who make religious observance a burden for others. Jesus never railed against faith (which is nurtured by religion), but always railed against hypocrisy (which taints religion as much as anything else in our lives). You can make the case that Jesus called the Pharisees "whitewashed sepulchers" and "vipers" not because being professionally religious is a bad thing, but because it entails living to a higher standard than, for instance, your average tax collector.