Does "Love Win" in "The Adjustment Bureau"? 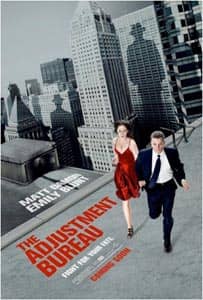 It is ironic that The Adjustment Bureau premiered this past weekend, considering the hubbub over Rob Bell's forthcoming book. If you are unfamiliar with the controversy, prominent pastor John Piper sent a disparaging Tweet about Bell supposedly being a universalist. The ensuing ripples of Piper's tweet catapulted Bell's book toward the top of the bestseller lists, and the Christian community finds itself in a discussion about God's will for the eternal fate of all humanity.

Enter The Adjustment Bureau. The slick sci-fi thriller is concerned very explicitly with the will of God on earth. Granted the Piper/Bell controversy is more concerned with the eternal fate of all humankind, and The Adjustment Bureau is about the more temporal fate, but the underlying question is the same: Are we destined to conform to a Creator's will, or do we have choice?

The film is as opinionated on the matter as Piper. I won't reveal the film's beliefs to you, because wrestling with those ideas is part of the tension of the film, and part of the film's resolution is in the heroes' coming to grips with what it means to live in their world.

That the film has a definite opinion on the matter isn't a terrible thing. So often, we want the stories we interact with to be more open-ended. No one likes to be told what to believe. That's at least part of why some people get so riled up at Christians. The film isn't telling you what to believe; it's telling you what it believes. What you believe is up to you.

Reel Spirituality was pleased to be able to host the writer/director of The Adjustment Bureau, George Nolfi, as part of an interreligious dialogue in conjunction with a screening of the film earlier this year. The dialogue, in fact, was Nolfi's idea. We were honored to host. (The audio of the interview can be found here.) He was joined by a Jewish, a Muslim, and a Christian scholar as well, and the ensuing conversation was fascinating. This film and the filmmaker behind it want you to think about destiny and free will and what part you play in working it all out.

Fortunately, this is also a very entertaining film, so it's not a chore to sit with it for a few hours and think alongside it. This is a love story wrapped in a thriller with a heaping helping of science fiction on the side. The chemistry between Matt Damon and Emily Blunt sizzles, and the supporting characters are well developed and well portrayed. I was also struck by the special effects. They are impressive without being overwhelming, and their use figures well into the plot.

In short, The Adjustment Bureau is an entertaining exploration of fate and free will. I encourage you to see it. Actually, you may not have a choice...