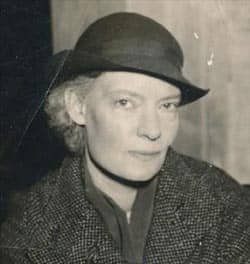 On the rare occasions Dorothy Day had time to herself, she enjoyed the Metropolitan Opera's Saturday afternoon broadcast. A favorite was La Bohème, the story of Paris' romantic rebels. As a young woman in the 1910s, she herself was among Greenwich Village's pioneer Bohemians, an aspiring writer and activist who knew many of its leading social and literary figures, including Eugene O'Neill and John Reed, who authored an eyewitness account of the Russian Revolution.

Born in Brooklyn in 1897, her family moved to San Francisco and later Chicago. At the University of Illinois, Day's growing interest in social and political issues led her to leave school and move to Manhattan. There she became a reporter for The Call, a Socialist newspaper, covering labor strikes and antiwar demonstrations. She even met Russian revolutionary Leon Trotsky during his New York sojourn.

A self-conscious reformer, she saw little room for religion. Its day had passed, she felt, and it was time for "new prophets." (Baptized an Episcopalian, formal religious observance had little part in her childhood.) During World War I, as the government cracked down on political dissent, she was arrested during a protest. Thirty days in jail—and cracked ribs—deepened her identification with the downtrodden.

Back in New York, she began an affair with journalist Lionel Moise, which led to an abortion she regretted. After their breakup, she entered a rebound marriage, but soon returned to Moise. All the while, Day's sense of vocation as writer was growing. So was her interest in religion, particularly the Catholic Church, which she came to see as "the church of the immigrants, the church of the poor."

By the 1920s, she was living on Staten Island with Forster Batterham, an English botanist. After her abortion, she doubted whether she could ever have children, and her subsequent pregnancy led to a religious awakening. "No human creature could receive or contain so vast a floor of love and joy as I often felt after the birth of my child," wrote Day. "With this came the need to worship, to adore . . ."

She had her daughter Tamar baptized Catholic, and Day herself soon followed. But Forster was a committed atheist, and the move led to their separation. Day supported Tamar through her writing.

Looking to unite her social concerns with her faith, she found an answer in Peter Maurin, an elderly, eccentric Frenchman brimming with reform notions. He urged her to found a paper promoting Catholic social thought. As she protested finances, he told her not to worry, just start. On May 1, 1933, The Catholic Worker was born, selling for a penny a copy. By December, 100,000 copies a month were printed.

They also began directly serving the poor on Manhattan's Lower East Side. Asked how that started, she said: "Well, if your brother's hungry, you feed him. You don't meet him at the door and say, 'Go be thou fed'!" Day and her co-workers lived in solidarity with society's outcasts, no easy task. In her diary, she confided: "The dirt, the garbage heaped in the gutters, the flies, the hopelessness of the human beings around me, all oppress me."

A strong spiritual life sustained her: the Liturgy of the Hours (the Church's official prayers), the rosary, daily Mass, weekly confession, spiritual reading and direction. "Without the sacraments of the church," Day wrote, "I certainly do not think that I could go on." In the 1950s, she became a Benedictine Oblate (a layperson practicing the order's charism in daily life).

Surprisingly, given her identification with the poor, Day's favorite saint wasn't Francis of Assisi, but Thérèse of Lisieux, whose "Little Way," an approach to holiness that concentrates on doing small things with great love, Day adopted. Former Catholic Worker Jim Forest writes:

A visiting social worker asked Day how long the "clients" were permitted to stay. "We let them stay forever," Day answered with a fierce look in her eye. "They live with us, they die with us, and we give them a Christian burial. We pray for them after they are dead. Once they are taken in, they are members of the family. Or rather they were always members of the family. They are our brothers and sisters in Christ."

From the start, Day's movement attracted idealistic young people. Tom Cornell, a longtime Catholic Worker, learned about Dorothy in college. "Here," he said, "was the Gospel being lived."

Not everyone liked what she was doing. Her pacifism (a position adopted long before her conversion) irked many, Catholics included. Conservatives considered her too left-leaning, and her support of a Catholic cemetery workers' strike in 1949 didn't endear her with local Church leaders.