A Hitman, a Priest, and a Confession 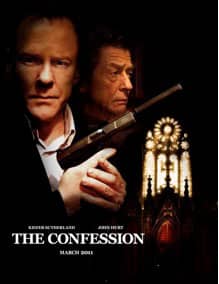 When a cold-blooded hitman bursts into a hotel room to execute someone, the intended victim does something unexpected: he asks the hitman for a moment to make his peace with God. The hitman lowers his gun as the victim takes a chain with a crucifix from around his neck, holds it tightly in his hands, kneels down with eyes closed, and begins moving his lips in silent prayer. Now peaceful and resigned to his fate, the victim opens his eyes, looks at the hitman, and says, "I forgive you." The hitman hesitates, looking confused and even regretfully at a peace he's never seen before, but then pulls the trigger anyway.

That's the incident that propels the story in the new online web series on Hulu.com, and across the DBG network, called The Confession. Shot partially in the Basilica of St. Patrick's Old Cathedral in New York City, the series stars Kiefer Sutherland as the hitman, and John Hurt as the priest to whom he contentiously goes to gain an understanding of what he witnessed.

Sutherland's character is definitely complex. He enters the confessional and speaks words from a bygone era of his childhood: "Bless me Father for I have sinned exceedingly in thought, word, and deed. I confess to Almighty God and to you, Father. It's been thirty-five years since my last confession."

When the priest asks if he's sorry for his sins, he says, "No," and goes on to explain he killed a man last night. The hitman isn't there for forgiveness, but rather to understand the peace he witnessed come over his victim the night before.

This begins a back-and-forth between Sutherland and Hurt that is intercut with scenes from the hitman's past. Though the flashbacks are interesting and well-done, the meat of the story hinges on the dynamic Sutherland and Hurt bring to their roles and their natural gravitas as actors. I felt like I could listen to the two of them debate morality and theology for an hour without getting bored. Those areas of morality and theology set this story apart.

For instance, the hitman was obviously raised Catholic based on his opening line in the confessional, but he's also someone whose faith never matured beyond a simplistic childhood understanding. I'd categorize his current state as an atheistic materialist because he can kill without compunction and believes, "We're so frightened that this is all there is, we've created the illusion of an eternal soul."

In a way, he reminds me of the character The Misfit from Flannery O'Connor's short story "A Good Man Is Hard to Find."

The Misfit also kills without compunction, yet has a peripheral awareness that Jesus could be real. If he's not real, however, The Misfit advises, ". . . then it's nothing for you to do but enjoy the few minutes you got left the best way you can, by killing somebody or burning down his house or doing some other meanness to him. No pleasure but meanness."

Though the hitman in The Confession admits he doesn't derive pleasure from his work, he uses a similar kind of justification to do what he does. And despite his denial of the existence of a soul, the hitman describes God as if he were real, though in the sense that the Almighty is a bigger killer than he'll ever be.

That's a common argument even among non-professional killers, especially in light of major cataclysms like the earthquake and tsunami in Japan. Some believers take these as a sign of God's punishment, while non-believers see it as a sign that a good and merciful God can't exist. In that sense, The Confession is addressing questions that are incredibly relevant to our times.

Sutherland plays his role with the believability and intensity we've come to expect from Jack Bauer, but The Confession also affords him the opportunity to work in more subtle ways as well. In particular, the hitman's Flannery O'Connor-esque potential moment of grace at the aforementioned execution is played with a mixture of sadness, incomprehension, and a little bit of awe.

John Hurt's priest character is also compelling, coming across as a good man struggling to do the right thing and convey his beliefs to someone who's lived a life diametrically opposed to them. I have a feeling that, as the story progresses, we'll learn more about the priest and he will become a more complex character as well. I wouldn't even be surprised if the confession of the title comes to refer to something in his own background.