Jesuit Education and the Dubious Frontier 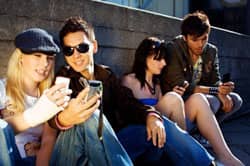 The word "frontier" summons images of vast and vacant land ready to be built upon and cultivated, images of early Americans galloping across amber waves of grain, excited to stake their claim. We hear the word and we think of big families persevering in strength and virtue, simple white churches and one-room schools. We envision a world waiting to be shaped.

"The frontier" is the metaphor the Society of Jesus recently selected to frame the position of Jesuit education in the modern world. Last summer, at Santa Clara University, the Jesuit Secondary Education Association (JSEA) sponsored a week-long colloquium entitled Jesuit Mission: Sent to the Frontiers. A Jesuit educator myself, I attended the colloquium. Throughout that week and long after, the metaphor troubled me: Does a frontier, I thought, accurately capture the landscape on which students learn?

A little over a semester into the new school year, having reconsidered the colloquium and its guiding metaphor, I am convinced the image is inadequate.

The most compelling evidence for this belief comes from my students. While covering the Sermon on the Mount, I had students read the Beatitudes from the Gospel of Matthew and then create a list of "Modern Beatitudes." I told students to imagine the perspective of, for example, the head of MTV or the publisher of a popular magazine. From that perspective, I asked, what makes someone happy or blessed?

Here are examples of what students wrote:

Teen pregnancy, plastic surgery, drug use, "problems," technology, social networking sites, violence—this is the stuff that a group of 15- and 16-year-olds believes its culture prizes. This is the stuff our students walk into, and out of, and back into, every day.

A second assessment has proved equally revelatory. In a faith inventory my sophomore scripture classes filled out last semester, students revealed they rarely go to church, rarely pray, and find organized religion of minimal or no value at all. Their gateway into transcendence is not church, sacraments, or prayer; for most of them it's music, the saints of Rolling Stone, or the virtual fair on Facebook. And while the irreligiousness of teenagers might be expected, the faith inventories indicated that students' attitudes are usually shared by their parents. Mom and Dad generally do not attend church or do so only sporadically, and they have generally lost a connection with a faith community. (In fact, not even official representatives of the faith can be relied upon for affirmations of belief: on a retreat I attended last semester, the Franciscan concluded his homily in the closing liturgy by saying, "God doesn't care if you're Catholic.")

With headphones stuffed into ears, devices fused into hands, and images and advertisements invading eyes and ears without ceasing, today's frontier is more New York City than Cheyenne. Our students don't walk home to vacant, green lands with grazing cows and rows of corn; they drive past Subway and Jack n' the Box, Ford dealerships and Best Buy. In their free time, many of our students tan themselves in the glow of the iPad or the violent movements of a video game.

And what kind of games? On the retreat I mentioned above, a few seniors spoke about one game in which a player can tie a prostitute to a train track.

Consider the contrast: St. Ignatius of Loyola opened up shelters for reformed prostitutes; now, students at schools inspired by his faith play games that involve killing them.

In today's frontier, houses of worship are not simple churches but tiny cathedrals retrievable from pockets, christened "smart phones." On this frontier, students rarely build; the frontier builds for them. For example, YouTube plays videos as soon as the web site is accessed and provides, without end, related content. Wikipedia offers bolded and underlined links to key terms and concepts, ensuring that students rarely distinguish the trivial from the essential. Microsoft Word fixes spelling mistakes instantaneously and now recognizes sentences in the passive voice.