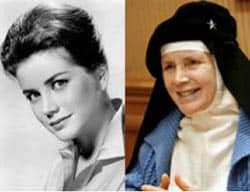 The season of Lent helps us realize that sacrifices and hardships can draw us closer to God. But for some people, those experiences last well beyond forty days.

I'm thinking specifically of Mother Dolores Hart, whom I once had the opportunity to interview on our Christopher Closeup radio show. You may remember Mother Dolores from her years as an actress during the late 1950's and early 1960's, when she co-starred in movies with Elvis Presley, Robert Wagner, and Anthony Quinn.

In 1963, she left that life behind—and even broke off her engagement to the man she loved—in order to follow a higher calling. Choosing to become a cloistered Benedictine nun at the Abbey of Regina Laudis in Bethlehem, Connecticut, Mother Dolores has dedicated her life to serving God for more than 40 years. After all that time, you might think there's nothing new she could learn about her faith. But pain has a way of being a great educator.

Twelve years ago, shortly after a three-hour dental operation, Mother Dolores got up from bed and discovered her feet were tingling so badly, she could hardly put any weight on the floor. She traveled from doctor to doctor seeking an explanation, but no one could adequately diagnose her ever-worsening condition. The 120-pound nun eventually lost twenty pounds, grew increasingly weak, and was confined to a wheelchair. Doctors suggested she receive psychoanalysis because they theorized that the whole illness was in her head.

Finally, Mother Dolores found neurologist Dr. Norman Latov in New York City. He told her, "Mother, pain is not in your head unless it's something that is a serious disorder in your head... We're going to find out what this is about."

Dr. Latov diagnosed Mother Dolores with peripheral neuropathy. She explained, "It's one of the most common diseases that most people have never heard of. It's a neurological disorder that disrupts and damages the body's ability to communicate with itself. It's a deterioration of what are called the peripheral nerves, which send signals to our feet, our hands, muscles, organs and tissues."

The neuropathy didn't just produce a physical challenge, but a spiritual one as well. Mother Dolores admitted, "No matter how much you think that you have come to a capacity of understanding your faith, when a person is struck with a serious disease where you can't do what you want to do, you can't go where you want to go, where you can't feed yourself, you can't apply your own medical needs...you begin to say, 'Where is God?'"

This complete reliance on other people taught Mother Dolores a new view of the way God works in our lives. "All of a sudden you find out that God relates to you through persons. Persons do, in the final analysis, become the incarnation. You have to become dependent on the gift of human beings, and you discover that God is an incarnate reality. In the beginning, God was always a pie-in-the-sky reality. Now I had to realize that Jesus was there through the people who were assisting me, caring for me and doing the things that were bringing me through.

That metanoia had to take place in me to submit to the gift of others."

Happily, Dr. Latov got Mother Dolores back on track to the point where she can lead a normal life. Her spiritual transformation, however, may be the most important gift of all.

Listen to Tony Rossi talk with Mother Dolores Hart about her Catholic conversion, her illness and all she has learned at Christopher Closeup Podcasts.