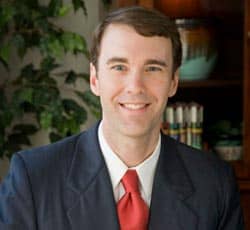 Today Gordon College, one of the premier educational institutions in the firmament of American evangelicalism, catches a rising star as it completes a seven-month international search and names D. Michael Lindsay its new President. It's a bold, brilliant, sensational choice.

Dr. Lindsay co-authored two books with George Gallup, Jr., while still a graduate student. With degrees from Baylor, Princeton Theological Seminary, Oxford and Princeton University, Lindsay has published in leading journals in three fields, and his first solo book, Faith in the Halls of Power: How Evangelicals Joined the American Elite, was published by Oxford University Press and nominated for a Pulitzer Prize.  Now a professor of sociology at Rice who specializes in matters of leadership, culture and faith, Dr. Lindsay has interviewed former Presidents and world leaders and titans of industry, he has lectured on four continents, and his work—profiled in scores of media outlets from The New York Times and CNN to The Wall Street Journal and Fox News—reached an estimated audience of 145 million readers in the last year alone.

And Dr. Lindsay is not yet forty.

In 2006, the World Congress of Sociology named him the most promising sociologist in the world under the age of thirty-five. Now Gordon College has named him its President, and the chairman of the Board of Trustees, Kurt Keilhacker, calls him "a game-changer." The selection of D. Michael Lindsay represents a passing of the generational torch, a commitment to new ideas and new approaches, and an opportunity to raise the school's profile on the national and international stage. Gordon College announced the selection this morning; Dr. Lindsay spoke with Timothy Dalrymple by phone.

This selection means moving your family, shouldering responsibilities that ordinary academics do not have to bear, and becoming the spokesperson for one of the top Christian colleges in the nation. How do you feel?

I'm thrilled with this opportunity, extraordinarily blessed to be given a chance at this moment in Gordon's history. It's an amazing institution with a terrific legacy, and it's a very strong institution. Dr. Judson Carlberg has been a terrific President for nineteen years. So it's a dream job for someone who aspires to build on an island of strength, and Gordon is definitely that.

You're unusually young for a college president, and are leaping directly from a faculty position into the presidency rather than passing through the typical intermediate administrative positions. What makes you think you're ready?

I bring a scholar's passion, a young person's positive energy, and a deep sense of calling to this work. I love the constituency of Gordon College: its students, faculty, staff, alumni and friends. Although I'm not a Gordon alumnus, I understand the school's DNA. I've studied it, I appreciate it, and I embrace it.

I think that those are the kinds of things that are vital for someone to be effective as a college President. It's because I feel such a deep alignment with the school and its mission that I'm hopeful I can add real value.

Your mother heads a school, the Jackson Preparatory School. Your father was once the president of the PGA. And you've developed a deep specialty in the study of leadership. Has God been preparing you for this calling?

I would not have expected the turn of events that has brought me to Gordon at this particular juncture. It's very unusual for someone to go straight from being a faculty member to being a college President. At the same time, I can look back and see how there have been a number of fundamental steps along the path, ways in which I feel God indeed has prepared me for this moment.

I began a career in higher education not as a faculty member but as a staff assistant, working in the President's office at Dallas Baptist University. In that role, I got to observe a highly effective college president, Gary Cook, up close, day in and day out. I learned the ebb and flow of a college president's life and the many different responsibilities involved in leading a Christian university.

Then I had the opportunity to focus for many years in my academic research on American evangelicalism, and reached conclusions about some of the most effective leaders and leading institutions within American evangelicalism. In my assessment, Gordon College was one of the very best. So it's a tremendous serendipity that my research brought me to the institution that I will now be given the chance to serve.