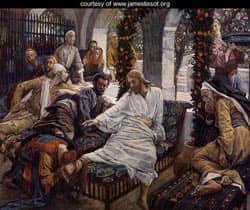 In a piece for Salon, Emily Matchar, a self-described overeducated, ambitious atheist, confesses an addiction to Mormon lifestyle blogs. She admits finding an odd allure in the bloggers' lives of simple faith and serial childbearing. When my generation wanted a break from urban anomie, we found ersatz wholesomeness in shows like "Little House" or that one with Wilford Brimley and the pre-Brenda Shannen Doherty. Thanks to the 'net, Matchar, that lucky duck, can get a whiff of the real deal.

In a way, Matchar and I are kindred spirits. I sometimes amaze myself remembering all the time I spent lurking in the 'net's sacred precincts. Since I actually have a religion, I get my kicks close to home, toggling between the Anchoress Blog and the websites for America Magazine, First Things, and National Catholic Reporter.

My MO differs somewhat from hers, though. Skipping over the authors' edifying words, I dive straight into the comments left by the sorely aggrieved, the easily enraged, and the monomaniacally obsessed. Call me a ghoul; I plead no contest. But my interest also has its scholarly side. These ranters and baiters sometimes look like the heirs of the flagellanti, if not the butchers of Acre and Monségur. Anyone who wants to forecast the future of the Church should be aware that they walk, and troll, among us.

For the curious, I've prepared a brief field guide to some recognizable types:

1) The Chief Mourner: For this nostalgic soul, spiritual perfection was realized in some Church figure of his/her youth. When that exemplar passed from the earth, the whole Church went to the dogs. To hear the chief mourner tell it, there's no point in even discussing the Church's problems, if Archbishop Sheen (Cardinal Bernardin, Dorothy Day, Pope John Paul II, Pope John XXIII) isn't around to solve them.

2) The Closet Sedevacantist: This master of reductive reasoning finds one explanation and one explanation only for every woe that plagues the Church. He blames the Second Vatican Council for clerical sex abuse, declining vocations, and even the designated hitter rule. (Pius XII would have fought to preserve the purity of our national pastime.) Since he prides himself on his docility to the Magisterium, he will, occasionally, observe a distinction between the conciliar decrees themselves and their subsequent application; but this is tokenism. In truth, he can't shut his ears to the idea that Good Pope John had been inspired by the Freemasons, the Devil, or both.

3) Casper the Friendly Ghost: The closet sedevacantist's natural counterpart and constant incubus, this person pines aloud for the Spirit of Vatican II. This Spirit, as he defines it, represented a boundless openness to change—aggiornamento without borders. In his gloomier moods, he writes of the spirit as though it were Sade's Justine—abused, betrayed, and violated at very turn. In his more buoyant moments, he writes as though it were out of commission but only temporarily, like Tinkerbell. If we all clap our hands and believe, Vatican III could be just around the corner.

4) The Heretic Hunter: If there's one thing this guardian of orthodoxy simply can't abide, it's dissent. An uber-ultramontanist, he could care less whether a particular teaching has been defined infallibly; if a pope scribbled it on a cocktail napkin, it's a nugget of pure truth. Disdaining subtlety as a fig leaf for the uncommitted, he rakes foes with broadsides like "The Catholic cafeteria is closed. Didn't you get the memo? CLOSED! From here on out, we only serve box lunches!" If all the people he banished to the Episcopal Church actually went, he'd single-handedly negate the Oxford Movement.

5) Dopus Dei: This tireless watchdog knows the Church is writhing in the steely grip of a personal prelature with 90,000 members. He has the goods, you see, because he's bestowed more clicks on the Opus Dei Awareness Network website than any member of Opus Dei, past or present. He'll tell you Opus has controlled the Curia ever since it bailed out the Vatican Bank. It also controls the Supreme Court through Chief Justice Scalia, and American Mideast policy through Erik Prince. Though he might spare a discouraging word or two for other ecclesial movements, like Focolare or Neo-Catechumenal Way, he finds them too mundane to bother about. Nobody combines "sinister," "authoritarian," "elitist," and "weird" like Don Escriva in his tight cilice and Phil Silvers glasses.