The Perfect Justice of Hell

Hell, thanks to author and hipster pastor Rob Bell, is in the news. Or rather the absence of hell—or its maybe-absence—or its maybe-temporary-reality. It's tough to sort out exactly what Bell thinks. Many progressive Christians—not just Rob Bell—are embarrassed that most evangelicals still believe in hell. Hell, to their ears, seems mean, cruel, and vindictive. Others caricature it, scoffing at the notion of pitchforks, demons, and burning coals. But Hell is nothing to apologize for or laugh about. It's real, it's indispensable, it's just, and—but for the inexplicable and irresistible grace of God—it's precisely what I deserve.

Our reluctance to deal with the reality of evil can extend even to the most heinous acts. Recently, here at Patheos, an otherwise thoughtful and insightful blogger equated the "religious right" with violent jihadists—the kind of people who shoot babies in the face then kill their mothers as they cradle the remains of their dead child; the kind of people who strap bombs to the bodies of mentally handicapped children and send them to American checkpoints; the kind of people who rape women and then tell them the only way to restore the family honor is to blow themselves up in a restaurant. How can a Christian writer make that comparison? By reducing the unspeakable horror of Jihad from the utter depravity that it is to the simple equivalence of "imposing their worldviews on others."

I have a confession. I'm an expert in evil. I am evil. Some people would call me good (though not many who comment on my columns!). They might say I'm a good husband, a good father, or a patriot. Yet I know the truth—that all good things in my life, all good qualities come from God alone and not from my nature and character. My nature is corrupt, damaged by the Fall and damaged by my own persistent sin.

And I'd dare to say that you, dear reader, are also evil, with inclinations or thoughts you'd hesitate to share with even your closest friends. "None is righteous, no, not one." And because of our nature, because we are evil, we cannot hope to stand before God. No human can.

Not Moses, who could not see God and live. Not Isaiah, who witnessed the throne room of heaven and immediately declared, "I am ruined." And not even Jesus' chosen disciples, who fell on their face in terror at the mere sound of God's voice while witnessing the glory of the transfiguration. They are the few who have glimpsed His holy reality, and in that moment they see who they are, they see who God is, and understand that the continuation of their very life is nothing short of an act of divine grace.

Evil demands a response. It demands justice. In 2008, I walked through a deserted Iraqi village where every man, woman, and child had been killed by al Qaeda (we found the videotape). As I stepped over bloody, abandoned children's shoes, it seemed as if the very rocks were crying out for justice. The relatives of the fallen longed for justice, and we felt it calling to us in our very souls.

Why did we feel that longing? Because a just God has written his law on our very hearts. God commands us to "act justly" in our calling as his followers. Justice isn't hateful. It isn't vindictive. It isn't toxic. And the divinely ordained penalty for sin—the just penalty—is death and Hell.

Think creationism in U.S. science classes is a dead horse? If only.
Rick Snedeker
3

What To Make Of That Revelation You Had
Anne Kennedy
4 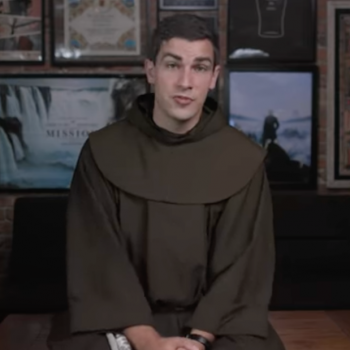 Responding to a Franciscan Priest's Question About "Good" Atheists
Hemant Mehta
Get Patheos Newsletters
Get the latest from Patheos by signing up for our newsletters. Try our 3 most popular, or select from our huge collection of unique and thought-provoking newsletters.
From time to time you will also receive Special Offers from our partners that help us make this content free for you. You can opt out of these offers at any time.
see our full list of newsletters
Editor's picks See all columnists