Preacher to Preacher: An Interview with J. Alfred Smith

Editor's Note: This is the second in a new interview series. Each interview asks the same five questions of great preachers in the pulpit today. 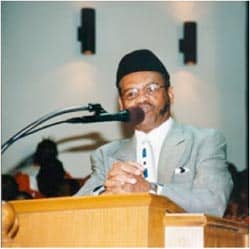 In the rigors of seminary academics, Rev. Dr. J. Alfred Smith blew into my schedule. I took two semesters of preaching from him at American Baptist School of the West in Berkeley, California. In his class, I not only learned the basics of preaching, I was pastored. Each week before student sermons began, we sang prayers for the Holy Spirit to come and we were reminded that we were called to be preachers. On the last day of class, we gathered in a circle, prayed, and sang while Dr. Smith, his wife, Rev. Bernestine Smith, and his teaching assistant, Robin, anointed each of us with oil. These were holy moments in the often dry desert of seminary studies.

Dr. Smith has recently retired from a longtime pastorate at Allen Temple Baptist Church in Oakland, California and continues to serve there as pastor emeritus. In addition, he continues his work at American Baptist Seminary of the West and is currently Scholar in Residence at Gardner-Webb University in Boiling Springs, North Carolina. Dr. Smith is a prolific author, including his memoir On the Jericho Road, and an outstanding prophetic voice of justice.

Truly a preacher's preacher, Dr. Smith encourages integrity and authenticity in all of his students. Despite his stature and public role in the church, he is humble and approachable. I was honored that he was willing to answer my questions for this interview. His answers drew me further into the pastor's heart of a preacher, which goes beyond brilliant exegesis, clear structure, and good timing into conversation with the needs of one's own congregation and the world.

What has been your journey as a preacher?

My preaching career started when I was a 17-year-old college student. In fact I became the pastor of a very small town and country church of some thirty-three members in Parksville, Missouri. I also served as pastor of rural churches while studying in both college and seminary.

The members of these small churches taught me to use their vocabulary in preaching. This was a difficult feat because every student is eager to practice using his or her newly discovered academic vocabulary. From being a pastor of small churches I became the pastor of 2nd Baptist Church of Columbia, Missouri. There I learned to adjust my presentation to their cultural context.

From Columbia, I moved to California to serve in an administrative position for the American Baptist Churches USA. In this position I lost some of my skill in preaching because I was not preaching every Sunday. When I did preach I found myself preaching the same old sermons over and over again. There was no real motivation for me to study systematically to prepare to feed people on a consistent basis that would promote their spiritual growth. Although I was adequately paid to be a staff person serving in an administrative capacity, my own heart was empty. and so by the grace of God I was able to move to the Allen Temple Baptist Church in Oakland, CA where I had a long career of preaching. While serving in that capacity I never had to hunt for sermons because I found myself preaching to the challenging, and ever changing needs of a vibrant urban congregation.

What do you see as the biggest struggle for new preachers?

The biggest struggle for new preachers is to preach to a biblically illiterate congregation that has a very short attention span.

How do you preach for transformation and movement toward justice (without being preachy or moralistic)?

The inductive method uses the method of story telling. The story-telling method draws the hearers into a personal confrontation with truth without the preacher coming off as super-righteous, or moralistic. Professor William Herzog II has helped me to preach prophetically in his book Parables as Subversive Speech. I would encourage every preacher to read his book. I would also refer them to Professor Herzog's book Jesus, Justice, and the Reign of God. Dr. Herzog helps us to see that Jesus was interested in the social, political, and economic well being of humanity.

About Jenny Warner
Jenny Warner is the Pastor for Justice, Spirituality, and Community at First Presbyterian Church of Bend, Oregon. She graduated from Biola University with a B.A. in Intercultural Studies and Psychology in 1992, and in 2010, received a Masters of Divinity from San Francisco Theological Seminary. She is a trained spiritual director, certified by Mars Hill Graduate School in Seattle.