Preacher to Preacher: An Interview with Nadia Bolz-Weber

Editor's Note: This is the first in a new interview series. Each interview asks the same five questions of great preachers in the pulpit today. 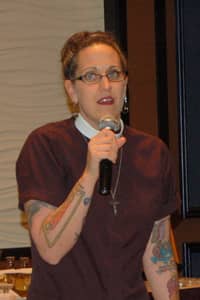 Nadia Bolz-Weber is a busy woman these days. She is in high demand as a speaker for conferences and meetings all over the world. Her writing can be found in The Christian Century, The Hardest Question, and God's Politics blog, in addition to her 2008 book, Salvation on the Small Screen? 24 Hours of Christian Television. But what struck me when speaking with Nadia is that her passion resides in her role as founding pastor of House for All Sinners and Saints, a mission church of the ELCA. All that has emerged in her popularity is because of her deep commitment to her primary call to faithfully pastor this community.

As a pastor who has been deeply influenced by both the emergent movement and my chosen mainline denomination, I find Nadia's voice invaluable. She lives in both worlds, seeing them not as competition, but always in conversation with each other, one deepening the other. She has a love affair with scripture. And in the end, it is not about popularity or being hip for Nadia, it is about Christ.

What has been your journey as a preacher? How have you found your call and your voice?

I was influenced by my emerging church fellows when I started out, and by the idea that preaching was an outdated mode of exploring the text. They are much less traditional in their approach to the proclaimed Word than I have become. One argument within the emerging church conversation is that the preacher is not ontologically different and therefore somehow special. But I have come to realize I am not the special person, I just don't have the same freedom as everyone else. I am not free to point to anything but Christ, not free to point to my opinion or someone else's perspective, I have to point to Christ and him crucified. I'm set apart to be the person in our community who struggles with the text all week long on behalf of everyone else.

It only took a couple months in to my work before I realized I was called to be a preacher. I didn't have a lot of confidence in my fitness for being the person through whom the Word was coming, but God has a history of working through unlikely people who do unlikely things. Now being a preacher has become one of my primary identities, but it is God and the people to whom I preach who have made me this.

I've noticed you use a manuscript when you preach.

The manuscript is about discipline more than anything else. I don't trust myself to ad-lib.

What do you think one of the biggest struggles for new preachers might be?

Trying to forget everything you learned in seminary and understand what the needs of your particular people are. Not thinking that your doctrinal or social justice commitments are more important than who your people really are and what they really need. We can come out of seminary with a big chip on our shoulders, which is not helpful in preaching.

Also, preaching comes at a great personal cost. It takes an incredible amount of time. It can feel as though I suffer the text every week in a real and personal way.

How do you preach for transformation and/or movement toward justice?

I am not a social justice preacher. Occasionally a political reality will enter the sermon if it's on everyone's mind and it would be irresponsible not to talk about. But, I am a Lutheran preacher and that is a fierce particularity. It means I preach law and gospel. I ask what is convicting me. I have to first be convicted by something within the text before my preaching of it has a chance to transform someone else. Just like the Christian life, preaching is about dying and having new life. I hope I never preach a text as "here's the problem and here's what you can do with it." I never want to do that, because it's just not good news.

Good news is when God is the subject and we are the objects. You can be convicting without being preachy.

What is your process of preparation for a sermon?

I start reading the text and reading about the text on 6 a.m. on Tuesdays. Later that morning, I have a text study with pastors who are smarter than me, which is key. Then it's a matter of absolute obsession; I think about it obsessively all week long. When I shower, go on a walk, wake up in the middle of the night, I think about the text. It's like sermonizing-as-mental-illness.

About Jenny Warner
Jenny Warner is the Pastor for Justice, Spirituality, and Community at First Presbyterian Church of Bend, Oregon. She graduated from Biola University with a B.A. in Intercultural Studies and Psychology in 1992, and in 2010, received a Masters of Divinity from San Francisco Theological Seminary. She is a trained spiritual director, certified by Mars Hill Graduate School in Seattle.