The Prosperity Gospel of Oprah Winfrey

After twenty-five years of stunning triumph, Oprah Winfrey plans to end her talk show in September. For some time, Christian critics have warned that Oprah is a cultic religious figure. But Kathryn Lofton's new book, Oprah: The Gospel of an Icon, helps us understand, both more broadly and more precisely, what the Oprah phenomenon says about America's therapeutic spirituality. Lofton's book dissects modern American society via analysis of the Oprah machine. Much of religious studies writing these days confounds the reader with purposeless jargon, but Lofton exemplifies the potential of religious studies by riffing on what the 'O' means in our culture, in which purchasing and consuming the right products has become inextricably spiritual, and our supposed path to the fulfilled life.

Lofton's prose is compelling; the effect of the book is like an avalanche. In reading Oprah, I kept stumbling over sentences so carefully wrought that I needed to stop and think. This is not to say that Oprah is an easy or entertaining read. But if you read it, you won't think about the connection between religion and consumer culture the same way again.

Does Winfrey promote a religion? Or does Oprah embody religion herself? A whiff of the religious is everywhere about her, says Lofton (who teaches religious studies at Yale): "she preaches the prosperity gospel, she advocates books as scripture, she offers exegesis, she conducts exculpatory rites, she supplies a bazaar of faithful practices, she propagates missions, both home and foreign." Oprah is a religion because in America, consumption—of clothes, food, and books—is a religion. The right experiences and products, we believe, will fill the void inside. The core of Oprah's message is the "spiritual injunction to consume," and in consuming, to become like Oprah.

In Oprah's world, consuming prescribed products actually becomes the manifestation of virtuous femininity, a quality which Winfrey herself ostensibly embodies. Lofton's book is full of jaw-dropping quotes, such as one in which Winfrey is asked by a therapeutic guru what she adores the most about herself. Oprah replies, "I adore that I feel a connection to other people that really makes me feel like a part of something that is bigger than myself. . . And I adore that I have a great generous spirit. That's the best thing about me. Everything I get, gets better when I share it." Winfrey then recounted how she recently found slippers so wonderful that she bought a pair for everyone in the control room.

Religion doesn't really suit Oprah, because, as Lofton puts it, "religion implies control and oppression and the inability to catalog shop. The only way religion—and religious belief—works for Oprah is if it is safely couched within a girl-power democracy and capitalist pleasure." Spirituality is the answer to this conundrum; spirituality provides divine sanction for the torrent of consumerist self-affirmation that Winfrey retails via her media empire.

One doesn't have to think about Lofton's analysis too long to realize that one could put much of modern evangelical Christianity under the same microscope. Indeed, that is a comparison that Lofton makes explicitly, if briefly. Joel Osteen and other Christian luminaries assure us that God intends for us to consume more—that is our "Best Life Now." And as sociologist Christian Smith has warned us, many young evangelicals' faith basically entails "moralistic therapeutic deism," a faith in a God who wishes for good people to be successful, happy, and materially blessed, and then to go to heaven when they die. Jesus, in this faith, is optional.

Now, it would be an overreaction to say that Christianity should not betherapeutic. (Should it foster dysfunctionality?) And there are certainly biblical themes of God blessing his people with material wealth. But evangelicals should shudder to think how close the religion of 'O' is to pop/teenage versions of their own faith. Lofton is not trying to warn Christians, or anyone else, about the dangers of 'O'-type spirituality. Indeed, the book warrants a prescription for a better answer, yet it never comes. Lofton even claims that she does not mean to be "condemnatory," yet the book so disembowels the 'O' phenomenon that the effect inevitably condemns.

Does the way of the cross primarily summon us to consumption or to sacrifice? The Christ of Oprah is just a "friendly guy named Jesus," and the spirituality Oprah blesses is "the incorporated optimism, the redemptive certitude, and the millennial promise of late-capitalist America." We should watch out, lest our faith become a vision spun by the self-appointed apostles of consumption. Oprah will retire her television program this year, but her faith will surely endure. 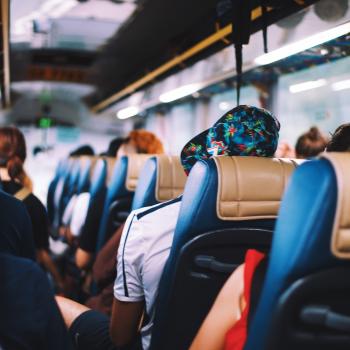 Spotlight: The Catholic Church in West Virginia and Accountability for Bishops
Brian Fraga
4

#CFP Climate Change as Reflected in Science Fiction, Film and World Literature...
James McGrath
Get Patheos Newsletters
Get the latest from Patheos by signing up for our newsletters. Try our 3 most popular, or select from our huge collection of unique and thought-provoking newsletters.
From time to time you will also receive Special Offers from our partners that help us make this content free for you. You can opt out of these offers at any time.
see our full list of newsletters
Editor's picks See all columnists