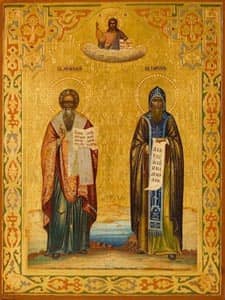 Last fall my Bible-study friend, Barb, took a trip to Russia to see the icons and churches that have been restored or opened since religious freedom has been re-established. Upon returning, she gave a presentation on all she had seen and learned, and I was so touched by her impressions that I asked if she would share her notes with me.

Barb traveled with a diverse Christian group comprised of Orthodox, Catholic, and Protestant clergy and lay people—their spiritual director was a Church of Christ minister—and Barb's shared memories of her trip seem relevant to the season of Lent we are in right now.

"Some churches," she told us, "are very ornate, and they survived the Soviet era even though they were turned into skating rinks, swimming pools, warehouses and more."

Many frescoes, icons, and other religious items were destroyed by the Soviets, and some churches are still in very bad states of disarray, or had been left to rot. Slowly, the churches are being released by the government to the people of faith.

Churches are being restored bit-by-bit, and they are finding frescoes and paintings as they scrape away the last 100 years. Hearing that, I thought of the scraping-away of the Soviet paint as the scraping-away of our sins, when we examine our hearts, and confess to the Lord those things we try to "paint over." Only by letting the Lord help us scrape away at our faults can we expose the beauty hidden beneath, to ourselves and to God, who sees all.

"From the time you step into a church," said Barb, "you know that you are in a place of worship. People are extremely dedicated, and the churches are completely quiet; the reverence is unbelievable."

The group saw "weddings any time of the week, and many, many young people praying. There were baptisms of young and old." Barb said that in one small church there was a delightful woman praying every day, like a modern-day Anna, who has been doing this ever since religious freedom had been restored. The group asked her how old she was, and she answered, "86 going on 97!"

Barb continued, "In Moscow, at Red Square, there was a lady praying on her knees—simply because she could!"

I was extremely moved by that. These people appreciate and treasure what had been taken from them for so long. My friend told us that you can see this all over Russia—the dedication to their religion. "I wish I could have bottled up the spirituality, and brought it home and released it here."

On their last day, the Russian tour guide took them to visit her sister's husband's parish, which is a very poor church in a small town outside St. Petersburg. The people there are slowly and painstakingly trying to restore this 17th-century church that was left to rot. It seems the Russian mafia is pressuring them to sell the property next to the church, so they can open a bar. A year and a half ago, a 17-year-old was found burned on the front steps of the church, and last summer the priest's mother-in-law was run down by a car. The priest has been standing up to the thugs, fighting against all of this for the past two years, and he still refuses to give into the threats.

The church means that much to these people.

The Russian people of all faiths had their religious freedom suppressed for so long; now they will fight to keep what they know to be so precious. The Soviet government tried to kill the faith of the people, but couldn't. Most kept their religion alive by passing it on in the homes—generation to generation, like a treasured heirloom, passed down. In light of the events we hear of around the world, of religious suppression and persecution, we need to pay attention to the faith of those who have lived through this, and learn from them, not to take our right to worship for granted.

Barb and her group began their pilgrimage by visiting the famous Church of our Savior on Spilled Blood, which is officially the Cathedral of the Resurrection of Christ, in St. Petersburg. They arrived the week of the "Adoration of the Cross." As they walked in, there was a cross on a pedestal, adorned with the most beautiful flowers. Barb said that it took her breath away. Every church they went into that week had a special, beautiful cross decorated with gorgeous flowers for this celebration.

Barb left us with this thought, "going to church is a privilege and a freedom we have and we don't want to ever live without."