This is one in a series of Lenten reflections on the men and women who became the "shouting stones" for Jesus on his way to the Cross. How do the actions of these everyday folk invite us in our Lenten journeys? In this reflection, pastor Bruce Epperly contemplates the faith of blind Bartimaeus. 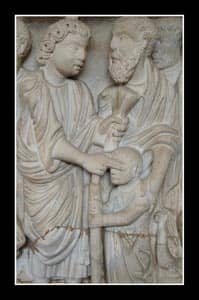 "There is nothing free in this world, except the grace of God." ~ Mattie Ross in True Grit

This was my moment. I had heard that the healer was passing by and nothing would keep me away. I know that God is the source of blessings, but sometimes receiving God's blessing is a matter of grit as well as grace, and so I went, praying with my feet and my outstretched hands, feeling my way to the road upon which the healer would be walking. It had been years since I had seen a sunset or a child's face. I had gotten along, just barely. A coin in my bowl, sometimes a scrap of food, was enough to get me by from day to day. But, I wanted more. I wanted the sunset, the hillsides, and the far horizon; I wanted blue sky, and scudding clouds. I wanted once more to look deeply into another's eyes.

And so I cried out, "Have mercy, Jesus, help me!" They tried to stop me. "Don't make a fuss. Don't cause a scene. The healer's got enough to do these days, what with the overwhelming human needs and controversies with the religious leaders." But, this was my moment, maybe my only chance to see again. I didn't know if he could heal me, but I was bound and determined to take the risk of failure just to have the chance to see again.

The more they tried to silence me, the more I shouted out, "Jesus, son of David, have mercy on me, help me!" I needed help and I needed mercy. I needed freedom from those who said my blindness was the result of sin or God's will.

Some of the religious folk believe that if you're blind, you must have done something to deserve it. But how could I have deserved it? I was just a child when the lights went out, when I lost the sunset and the blue sky! I'm no theologian, but if there's a God, I don't think my blindness came from God. I think God is like this Jesus, this healer, who welcomes the unclean, who touches the contaminated, who sits with rich and poor alike. I think the real God, the only one I can believe in, wants to heal me, not punish me.

And, then I heard the healer call out, "Bring him to me!" My heart leapt for joy. Could this man be talking to me? Could this be the day I see again?

As I stumbled forward, he asked me the most surprising question: "What do you want me to do for you?" Imagine that, he's asking me what I want! He's putting me in charge of my future, as someone who has choices that make a difference. He wants to serve me, give me what I need. "Rabbi, let me see again!" That's what I want.

"Your faith has made you well." I'll never forget those words, and the amazing seconds that followed. I saw again—clouds, faces, hillsides, and Jesus. Fuzzy at first, but then clear as the light of day.

"Go," he said . . . but where could I go? And, what would I do? In that moment, as I saw the world again, I knew I had but one choice, and I would use it well. I would follow him wherever the journey would take me. And, so I did—I followed. The path took me to sights I hope never to see again: a jeering crowd, a crown of thorns, a cross, and a dying man.

But the things I've seen since—you can't imagine! I've seen Jesus—alive, but scarred. I've seen frightened people regain their courage. Most of all, I've seen the beauty of the sunrise and olive trees and children playing.

Years have passed and I still follow him on the Way. He's gone physically, but he's very much alive in me. He is the inner Rabbi, constantly asking "What do you want me to do for you?" and "What do you choose for your future?" That moment was more than a physical healing. I also received a vision. I became an agent. No longer passive, I choose to follow him day by day. I've become a healer myself. His power and spirit live in me, so when I tell my story, people believe and they experience new life, too. Sometimes, it's their faith that makes them whole; other times I touch them with love and God's energy and change their souls and cells. Sometimes, I simply ask them, "What do you want out of life?" and give them the courage to choose health and life rather than wait passively while life passes them by.

Yes, my faith made me whole, but it wasn't just my faith. That day, it was my faith speaking to his faith, and his vision providing me with my vision. When I heard Christ calling me to him, I knew that regardless what happened, I would be healed by one who truly cared about my life. My faith keeps me whole as I walk the path, following him, for now I am his eyes, seeing the world as he saw it; and now I bring his vision and healing to the world I see.

Once I was blind, now I see. Once I was lost, now I am blessed . . . and each day I try to follow the healer and bless everything I see.