This is one in a series of Lenten reflections on the men and women who became the "shouting stones" for Jesus on his way to the Cross. How do the actions of these everyday folk invite us in our Lenten journeys? In this reflection, pastor and spiritual director Elizabeth Nordquist reflects on the unnamed woman who anoints Jesus with expensive oil. 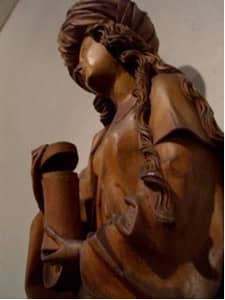 A Bearer of Beauty
Mark 14:3-9
She appears out of nowhere in the story of Jesus, unnamed, without resume, into the company that Jesus was keeping. Jesus himself is moving around in a perilous atmosphere with authorities trying to do away with him. He is keeping questionable company with one who is called Leper, an outcast either in his present condition or in past history. The Passover festival is two days away, and tensions are high in many quarters. And here she comes.

What she brings into this gathering is beauty: alabaster, a mineral stone that could become translucent in the right light; nard, an expensive scent used for calming and used for preparing bodies for burial; and an act of graceful touch, pouring the scented compound on Jesus' head. And the gallery says, "What a waste!" But for Jesus, the One who will be walking this lonesome journey, the beauty is not a waste. The RSV renders Jesus' words as, "She has done a beautiful thing to me," and it means something.

She has done what she could. As a woman she had no seat of power conferred on her from which to make decisions, or even enter the important conversations about the Jesus Way, about the current state of politics or the economy. Therefore, she begins where she is: What do I have? What can I do? What risks am I willing to take?

There is no way to know how to answer those questions for her. I wonder if she came from a wealthy family, had access to the wealth in the house, or saved the alabaster jar as an inheritance from a long time ago. But she began where she was. If she had been a 21st-century middle-class North American, the seductions would all beckoned her to rush out to buy something else, to hire someone to cater an event, to enlist the community to do something quite spectacular. But, what she did was spectacular enough. Doing what she could puts her in the company of the Little Shepherd Boy who played his drum for Jesus or the Clown of God who juggled to make the Baby Jesus smile. The train of bearers of the beautiful stretches out into our own stories—the one who gathers flowers from the garden to bring color to the drabness, the one who offers clean sheets and a well-lighted place to the traveler, the one who sings lullabies to tiny ones for their comfort and rest.

In some ways, according to Jesus, the woman with the alabaster jar is a forerunner of those who work for Hospice. Those professionals and volunteers have no power or mandate to stop death. However, they do what they can to accompany the dying one on the journey for physical life to life with the Mystery. They take great care to keep the dying one clean and comfortable.

The woman with the ointment of nard used her hand to spread the aroma and texture into the hair, scalp, neck, and shoulders of Jesus—for respite from pain, for removal of tension, for blessing in the present moment. Jesus recognized this act as an anointing for his burial. He will be anointed again after his physical death by the women who followed him so closely during his ministry, but now he is able to feel and savor the beauty that meets him in this moment of tension, trepidation, and wondering.

I wonder if the sense memory of his first anointing will be one of the gifts that he will recall amid the pain and the agony of his dying. He remembers the one he calls Father on whom he calls in his extremity. He certainly remembers the scriptures of his tradition that were part of the beauty of the liturgy he knew from his grounding in his faith community. He remembers his relationships of family and friends who stand with him. Will this gift from the alabaster jar remind him of the love that God provided for him among the people of the world God gave him to love?

And the woman. Jesus declares that her story will be told and remembered in the whole world.

It is. But what did she remember? What did she know? Far from technology and worldwide webs, far from news flashes and instant replays, I am imagining that she had no idea of the way her story would be carried forward in word and deed. In my imagination she went about her daily tasks in Bethany that day, and heard that Jesus, whose teaching and presence had given her life, was going to be at Simon the Leper's. She let her eyes and sensibilities be open to what was within her power to do, picked up the precious bottle with the healing ointment and walked into the place of the meal, unexpected and uninvited, to offer her love and gratitude to one who was in danger and need. She may even have anticipated the push-back from the critics. But that didn't stop her from doing what she could, something beautiful. And Jesus welcomed her.

May we this Lent do what we can for those in the world we are given to love and honor, whatever the risks or criticism; it will be beautiful.