Subprime Speaks to the Priesthood

Last year I attended a Mass celebrated by a young priest for whom many observers in the diocese were predicting an illustrious future. He was wearing what I can only describe as the Fr. Corapi Starter Kit. Along with the aggressively shaven dome, he sported a goatee fit for an outlaw biker or a king's musketeer. He did not walk; he strode. He did not speak; he intoned.

He informed us that he made it his practice, upon visiting a college campus, to dress in his cassock and pace the grounds while reciting the rosary out loud. One on occasion, he told us, the largest of a group of alt-rocker types hissed, "I like little boys, too." Father decided that discretion was the better part of valor, but hastened to kick responsibility upstairs.

"If it weren't for the Grace of the Mother of God," he said with a glower, "there might have been some kind of 'confrontation.'" The scare quotes around the final word were audible.

Doubtless, the student's remark was inexcusably rude. Nevertheless, it seems more age-appropriate than the priest's own behavior, and for that reason, less fatuous. First, this odd little show-the-flag mission that Father assigned himself looks more exhibitionistic than charitable. It struck me then—and still strikes me, upon reflection—as the evangelist's equivalent of cruising in a vintage, tricked-out El Camino, popping the hydraulics at every stop light, lest fellow motorists dare forget how cool he is.

Second, no sober man over the age of, say, 19 should feel the need to excuse himself for not wading into a melee. A little well-bred timidity is perfectly understandable, especially if he happens to be addressing Christians, not Crips.

Was this guy a one-off? Maybe. Or he could be a disfiguring side-effect of a new trend. In an article for CatholicCulture.com entitled "The New Catholic Manliness," Todd Aglioloro writes of a new breed of clergy who assume a "husbandly" posture toward the Church and affect a decidedly butch style. Here he quotes Monsignor Stewart Swetland of the Franciscan University of Steubenville: "[Younger priests and seminarians] work out, they play sports, they want to look and dress and act like men."

Though published two years ago, Aglioloro's article fascinates me, for several reasons. He sees the Church as a battleground—girls on one side, boys on the other. "The post-conciliar Church in this country," he writes mournfully, "has . . . been run by women." Aglioloro proceeds to snap wet towels at those he considers fifth columnists in the struggle: "the effete"; "priests with squishy handshakes"; "Father Reilly, once his mother's darling"; "the Phil Donahue generation, limp caricatures of sensitivity."

To his credit, Aglioloro stops short of making any facile equations between homosexuality and pedophilia, or even between effeminacy and homosexuality. But what he does do, in a way, is even more daring. In short, he blames femininity for everything he doesn't like about the Church, from bad catechesis to "the worst crimes of the Lavender Mafia." He does write critically of the "rough or aloof" priests of the postwar generation and their "hyper-rationalized" theology. Still, when he writes of "manly virtue," one gets the sense that, for him, manliness is virtue.

If instruction in the seminaries is taking a similar tone, conflating a call to holiness aimed at the soul with an appeal to the male ego (located guess where), then somebody's playing a very dangerous game. Masculine pride is a naturally volatile substance. In a system where masculinity and femininity are rigidly defined and polarized, it becomes machismo, the psychological equivalent of nitroglycerine. It can make men behave in ways that are ridiculous at best, atrocious at worst. Think Mike Dukakis in the tank. No, better, think Tom wedding Katie.

I saw those buttons pressed down to nubs in the subprime mortgage industry, which ranked, in terms of self-consciously masculine milieux right below the bass section of the Waffen-SS glee club. The language of business was the language of sexual potency. In industry jargon, one could opt either for the "hard" or the "soft" sell. Hard selling meant closing deals speedily, with force and authority—see Alec Baldwin in Glengarry Glen Ross, for an ideal representative of the type. Soft selling meant offering tea and sympathy.

An almost visible coronet settled on the brows of the hard closers. There were good, practical reasons behind this. The hard approach alienated some potential borrowers, but when it worked, it worked big. It squeezed commitment out of people when they were still in a state of exploitable ignorance. Spend too much time building a rapport, chatting about the weather or Barry Bonds, and the next thing you know, you'll be fielding questions like "Why is this loan origination fee so big?" 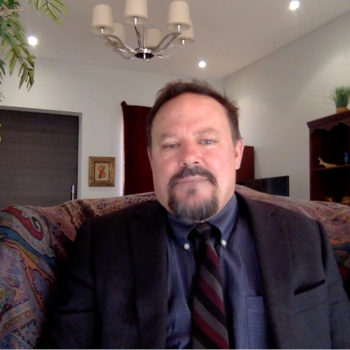 Jesus the "Nazarene" Redux (vs. Jonathan M. S. Pearce)
Dave Armstrong
Get Patheos Newsletters
Get the latest from Patheos by signing up for our newsletters. Try our 3 most popular, or select from our huge collection of unique and thought-provoking newsletters.
From time to time you will also receive Special Offers from our partners that help us make this content free for you. You can opt out of these offers at any time.
see our full list of newsletters
Editor's picks See all columnists