The danger that intellectual provincials run is appealing to the Romans in a provincial context or thinking that we cannot be who we are, with our own beliefs and ideas, when we find ourselves in Rome. We forget that, qua Mormons, we are not and cannot be contemporary Romans. Some of us, more and more of us, may manage to pass, but to most people we remain provincial.

The gospel is that beyond. Though we have allegiance to the gospel of Jesus Christ, it has not conquered us. We are not in God's provinces rather than Rome's. In the gospel we are in no province at all, for the gospel was given to liberate us from bondage to all conquerors.

To be beyond the provinces is not to have no opinion, as if the only possibility for thought is given either by or against a conqueror. To be beyond them is to have an opinion that does not take part in the economy of conqueror and provincial. When we are genuinely beyond the provinces, we have definite views, but they are views that neither acquiesce to nor define themselves by Rome, by the dominant and dominating views.

In fact, these thinkers are usually quite passionate about their views. They take definite positions on questions. They argue as well as they can for those positions. Those who succumb neither to Rome nor the provinces may and probably do adhere to dogma (which isn't necessarily a dirty word), but they do so non-dogmatically. Such thinkers remain humble and charitable, even in their confidence, even in their disagreement. That's something inconceivable both to a provincial and to a Roman.

My experience with Mormons, intellectual and otherwise, is that we too often lack the gospel's humility and charity. I doubt that we are unique in this, but that does not excuse us. We lack not only charity for those less financially fortunate than ourselves, but charity for those who disagree—and the humility not to set up ourselves rather than the good news as a standard of truth or righteousness.

Charity requires that we give those with whom we disagree as much credence as possible, that we assume that however wrong they are, there must be some sense in which what they say is a reflection of divinity and that in almost every case they too are motivated by a desire for the truth. Humility requires that we even consider that they might be right, perhaps even absolutely right.

The gospel of charity and humility is the only real alternative to provincialism. 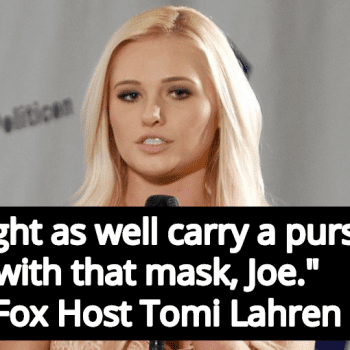 Fox Host Tomi Lahren Mocks Joe Biden For Wearing A Mask
Michael Stone
Get Patheos Newsletters
Get the latest from Patheos by signing up for our newsletters. Try our 3 most popular, or select from our huge collection of unique and thought-provoking newsletters.
From time to time you will also receive Special Offers from our partners that help us make this content free for you. You can opt out of these offers at any time.
see our full list of newsletters
Editor's picks See all columnists