Blueprint for Living, Part Four: A Lenten Series on the Sermon on the Mount

Editor's Note: This is the fourth in a series of Lenten reflections on the Sermon on the Mount. To read an introduction to this series, click here. 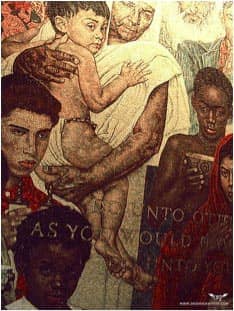 The Golden Rule
Matthew 7:12
These words of Jesus have become known as the golden rule: "Do to others as you would have them do to you." At first glance this moral maxim seems simple and straightforward, one that could be worn around the wrist and used as a quick reference as to how to behave toward others.

In my first church, the creative school housed in our church soon offered me the opportunity to address the children in chapel. Being careful not to overwhelm these little tots with the heavy theological jargon of my recent seminary training, I carefully chose a scripture so simple and so profound that even a child could understand. I chose the golden rule.

The children marched into the sanctuary and sat down in the first few pews in front of me. They seemed so eager to learn from this new minister of the church. I, though a bit nervous, was anxious to share words of wisdom with them—and also to get this assignment off my plate. I had not yet been warned about the danger of asking questions of little children. No one had told me the maxim: "Don't ask, or they will tell." So I foolishly offered a question to assess what they knew about these words of Jesus. I turned to the children and asked: "Can anyone here say the golden rule?" I was thrilled when a cute girl with curly blonde hair raised her hand. I nodded to her to prompt her to speak, to share her biblical knowledge with all the less-educated ones around her.

"The golden rule," she said with great pride, and sat down.

I was speechless and the teachers were greatly entertained. I, too, can say "the golden rule" but explaining it or living it is truly a different matter.

Consider for a moment what it might be like if everyone lived by the golden rule, if everybody treated us just like they would want to be treated? Wouldn't that be great?

Perhaps. But if misapplied it, it might mean that when I was a dinner guest at the home of a vegetarian I would get seared tofu instead of the juicy steak I had hoped for. It might mean that a woman hoping for an anniversary gift of precious metal would receive from her well-intentioned husband copper guttering. (This is a true story of friends of mine. The husband is now given a list of gifts from which he can choose.) My point is simple. The golden rule cannot be applied by blindly asking, "What would I want?" and then summarily giving that same thing to others. If so, in following such interpretation, a masochist would become a sadist, giving to the other what he wanted himself—real pain.

The rule that Jesus gives, though simple to the ear, is more complex in its execution. Ultimately what we want from others is not what they want to give us or even what they want themselves. What we want is for someone to work long enough and hard enough to know our inner longings and our deepest needs. Only then can the golden rule reach its ultimate fruition.

So the question we must ask ourselves before we offer our gift to others is not, "What do I want?" but rather, "What does this person really need? What would be most helpful?" If we ask that question honestly we may find ourselves giving outside of our own comfort zone. Though carnivores ourselves, we may whip up a dinner of tofu and sprouts for our vegetarian friend. Though our nature is to be talkative, we might keep silent while a best friend shares her soul about the death of her spouse, or an impending divorce. The golden rule, rather than being based primarily on self-knowledge, is really dependent on our ability to listen to the heart and soul of others, to take the time to discern their needs. It means in fact that we may have to give them even what they do not want—a kick in the pants when they would prefer doting sympathy. If we are honest and wise, what we should wish others to do to us is not always what we want but what we really need. I certainly have found a friend's confrontation at times as helpful as a friend's loving support. The secret, you see, is knowing when to do which.

In final reflection, the practice of living by the golden rule is not as simple as we first thought. It requires that we learn to listen, to discern, and to be guided by pure motives, motives that are intended for the good of the other and not ourselves.