Bruised for Our Iniquities: Dreyer's "The Passion of Joan of Arc" 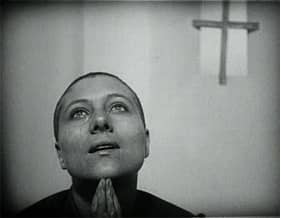 Carl Theodor Dreyer's silent masterpiece The Passion of Joan of Arc (La passion de Jeanne d'Arc) was released in the spring of 1928, making it one of the oldest Lenten-themed films available for these all-important days of Passiontide. Yet despite its age, it remains a moving cinematic portrayal of redemptive suffering and the power of faith.

Based on the transcripts of St. Joan's Trial of Condemnation in Rouen in 1431, The Passion details the saint's unjust conviction and eventual execution at the hands of an English-backed ecclesiastical tribunal. The Maid of Orléans' earthly demise is a sorrowful and unsettling story that echoes keenly in these troubled times. Watching the young Joan before her accusers as she answers their charges with shy respect and unwavering patience—seeing her attacked by those very men most responsible for protecting her—is a chilling reminder of human fallibility and of the corruption that can creep into even the most sacred institutions.

Despite the demoralizing role Bishop Pierre Cauchon and his fellow churchmen played in Joan's death, Dreyer's work manages to avoid the easy error of "guilt by association." The decision to base his script and intertitles on the actual court records lends the film a palpable sense of authenticity - an accuracy that makes the bishop's relentless efforts to break Joan's spirit doubly painful to watch. Yet the film succeeds in confining its condemnation to a few corrupt men, rather than leveling a blanket criticism against the Catholic Church itself. The relative lack of historical context, combined with the many questions and answers preserved throughout the years, help to place responsibility for the great injustice of her execution where it truly belongs: at the feet of those who subverted her trial for the sake of their own political ends.

The Danish-born Dreyer, whose intentionally fragmentary and disjointed visuals must have shocked his audiences profoundly, was notoriously evasive when asked about his own beliefs. But his portrayal of Joan's unquenchable commitment to Christ, upheld at the greatest cost, leaves little doubt as to why he found her story so inspiring. Resisting the easy way out for the sake of one's principles is not unique, but to do it at such a young age, for so long, and in the face of such concerted resistance from those Joan had long considered her truest guides? That is truly heroic virtue.

Renée Maria Falconetti, a stage actress whose role in Dreyer's magnum opus was the second (and final) one of her cinematic career, delivers a performance widely considered to be one of the most extraordinary of all time—her haunting, luminous eyes and sorrowful countenance are perfectly suited to the extreme close-ups for which Dreyer's film became so justly famous. Yet despite the unquestionable power and scope of her performance, it is not the most essential in the film. That distinction falls to Antonin Artaud, the legendary avant-garde playwright, director, and actor whose role as Joan's sympathetic jailer serves as the film's emotional center.

Artaud's Father Jean Massieu is the perfect foil to the tribunal's caricatured villainy. Without him, the extravagant lengths to which the bishop and his fellow conspirators go in an attempt to break their young prisoner (and the equally extravagant stylistic flourishes with which Dreyer portrays them) could easily shift into parody. But with Father Massieu looking on, the film's viewers are given a prism through which to view the unfolding tragedy—a character whose response to Joan's suffering mirrors the horror and sympathy they feel themselves.

In the film's closing moments, with the flames licking cruelly at the wood below her, Joan frantically searches through the faces of the villagers who have gathered to witness her execution. Father Massieu, recognizing the true source of her distress, holds up a large crucifix so that Joan may gaze upon her Savior in her final moments. Despite her obvious anguish, Joan grows peaceful in the presence of the cross, offering herself up as He did so many years before.

Still, the good priest's final act of kindness is not the most important Lenten lesson to be drawn from his role in Dreyer's story. Despite Father Massieu's obviously heartfelt distress at the injustice of Joan's death, the fact remains that his reluctant silence during her trial marks him as complicit in her undeserved execution—a troubling reality that cannot be undone by his palpable grief.

Yet do we not stand to Christ's Passion and Death in precisely the same way? Were we to stand at the foot of the Cross on Golgotha on that first Good Friday, would we not react with horror and sorrow, just as Father Massieu did? Still, such powerful emotions cannot undo the fact that each individual member of the human race is implicated in the brutal events at Calvary. Even as we recoil from the injustice of His death, we recognize that we have placed Him there through our own selfishness and pride.

We must always remember that "He was wounded for our iniquities, He was bruised for our sins" (Is 53:5), for without confronting our own culpability, we may miss the most vital message of all: "By his bruises we are healed.

(One Final Note: As is so often the case with silent films, The Passion of Joan of Arc was released without an official soundtrack. The Criterion Collection's DVD, however, features as its score "Voices of Light," a piece composed by Richard Einhorn and performed by Anonymous 4. Einhorn's oratorio was inspired by his viewing of Dreyer's film rather than written as an actual soundtrack, but the combination of the two is breathtaking. Watch the Criterion version.)