Divine Mercy and the God Who Suffers 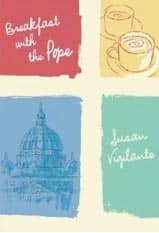 Last fall my husband moderated an event where we met Susan and Richard Vigilante. Susan gave Ed a copy of her book, Breakfast with the Pope. When I heard the title my ears perked up with interest. I knew immediately I wanted to read it as soon as there was an audible version available. Being the humble man he was, Pope John Paul II is in the background, playing a "supporting role" in this wonderful book. Breakfast with the Pope is a painfully honest, real-life, and often hilarious personal story of Susan's faith journey, with which many will be able to identify. She is donating all the proceeds from her sales to build a John Paul II school in Cambodia, from where the Vigilantes were so blessed to adopt their beautiful daughter.

As you read this Ed and I are in Rome. We are thrilled to be there during the feast of Divine Mercy that John Paul II designated as the first Sunday after Easter. That very day we will witness his beatification ceremony.

It seems fitting, somehow, that the pope who so often told us "do not be afraid" should die on the eve of this feast in 2005—"a God instance," I think, and with the same grace and courage with which he lived. He was an imitator of his Lord, opening his heart to all, even to his would-be assassin, whom he forgave.

In Susan's book, I became emotional reading the following excerpt, which paints so beautiful a word-picture that I could see it all, in my mind's eye. It reminded me of the tremendous love and mercy available for all souls. The display she describes is above the altar in the Church of San Tommaso in a small village near Castel Gandolfo:

. . . I stared at the great altar setting—one of the most dramatic of Bernini's creations. Above the altar is a very large oval painting of the crucifixion by the artist Pietro da Cortona, vivid and powerful. Jesus is just at the point of death, mourned by His mother, the Magdalene, and St. John. They aren't the only mourners. Bernini had taken the painting as an inspiration and surrounded it by mourners in stone. And since this is Bernini, they are mourners in living stone. The frame of the painting is held up by two angels, one on the right, and one on the left at the bottom of the oval. Clinging to one of the angels is a naked cherub. All the angels clearly have to be there as witnesses to the crucifixion. Their eyes are turned away—their eyes cast downward as if they can't bear to look. On the right side of the oval near the top, a little marble cherub clings to the frame, one chubby arm reaching onto the portrait itself. The cherub's head is on the same level as the crucified Jesus, and the baby face looks at Christ with an expression of mystified sorrow, like a child seeing something it doesn't understand, but knows it is wrong. Christ suffers, Mary suffers, John and the angels are in anguish, but they are not alone. For above the painting is a marble figure of God the Father. It is in some ways a traditional portrayal with a long beard and flowing robes. But there is no serenity here—no stately majestic hovering in the heavens.

He has left heaven behind, hurdling through space down, down, down His robes streaming back behind Him. His arms outstretched toward Golgotha. He has seen the suffering of His Son. He reaches out to Jesus. The outstretched hands are full of horrified vitality, the fingers spread, the tendons taught with anguish. This is a Father watching His own child being tortured, and not watching only. For it is near the end now, and He has heard His child scream out in pain the most devastating words that anyone can imagine in his worst nightmare, "Daddy where are you? Eli, Eli, lama Sabachthani. Why have you abandoned me?"

He hates it, He hates every inch of it, every breath of it, every second of it. But still He does not intervene. In the end at the last possible moment hurdling through the air, He stops. He does not allow Himself to enter Himself into the scene. To storm into Jerusalem, and reveal His power. He watches in unfathomable grief as His Son fulfills His destiny. He pays a price just as His Son did, and who's to say that the Father's wasn't greater. He didn't want it, either. He didn't want His Son to die. He never planned it this way. He made us to be with Him body and soul. Death was never in the blueprints, that was someone else's bright idea. "You hated it, too," I thought. "You hated it as much as we do." And then I wept, and wept. (255)

Reading this beautiful depiction of His incomprehensible Divine Mercy for me, for all mankind, and pondering what our salvation costs, I had the same reaction.

But God demonstrates His own love for us in this: while we were still sinners, Christ died for us (Rom. 5:8).