Faith and Film: A Review of Soul Surfer 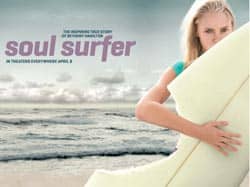 "For surely I know the plans I have for you, says the Lord, plans for your welfare and not for harm, to give you a future with hope. Then when you call upon me and come and pray to me, I will hear you. When you search for me, you will find me; if you seek me with all your heart."  (Jeremiah 29:11-13)

Christian filmmakers would do well to study director Sean McNamara's fact-based story when they attempt to make a film designed to "inspire" audiences. With a minimal amount of "God talk" and a great amount of stunning photography of surf and its riders, he and his team of co-writers have given us a film that truly is inspiring.

Even the film's title is not from the religious realm, unless you regard surfing itself as a religion—and it certainly is similar in that its adherents must be disciplined, dedicated, and in love with the sport, which is a fair definition of a soul surfer, one so enraptured by the waves and thrill of riding them that she has moved beyond the thought of mere winning. Teenaged Bethany (Anna Sophia Robb) is such a person, born into a family of surfers living in Hawaii. Her parents Cheri and Tom (Helen Hunt and Dennis Quaid) are skilled surfers, as are her two brothers. Even on Sundays she is to be found surfing at the beach near their home, as we see in an early scene in which her father calls her in because it is time for church.

Thus we see that the family is deeply committed to God, their church worship service being a joyful assembly, the informal service held under a wall-less thatched shelter. Like Job, everything is going well for Bethany until that ironic Halloween morning in 2003. (This shocking incident is set up well by a brief scene in which youth minister Sarah [Carrie Underwood] quotes the above passage from Jeremiah.) Bethany is out surfing with some of her friends and Holt Blanchard (Kevin Sorbo), the father of her best friend Alana (Lorraine Nicholson), when she is attacked by a 14-foot tiger shark, and the fierce creature bites off her left arm.

Both she and Holt remain calm enough that neither panics, and he staunches the blood until the emergency squad arrives. The hospital surgeon, Dr. Rovinksy (Craig T. Nelson), is a family friend, and so the stricken girl is surrounded by caring people—including not only her family, but Alana and other friends, and her youth minister Sarah, as well as the rest of the hospital staff.

One of the strong points of the film is its depiction of a loving circle of believers who are with us in good times and bad. This is certainly Bethany's bad, indeed, her worst time, and though her faith is strong, she too grieves over her loss and wonders, crying out to her youth minister, "Why me?" To her credit, Sarah does not respond with the easy and trite answers of those in Rabbit Hole who lamely try to console Nicole Kidman's character over the loss her young son. The youth leader admits to not knowing, realizing that death, like life itself, is a mystery. But, like the hovering presence of God, she is there for Cary. And the youth group becomes a part of Bethany's road back to a healthy mind. When she accompanies her friends on a service project to Thailand to help the survivors of the great tsunami that devastated the region, Bethany encounters those who have suffered as she has, but even more. Her heart is touched by a child who has become so fearful of the water that he will not go near it. Picking up a surfboard, Bethany walks toward the ocean as she beckons the child to join her. He refuses, but apparently touched by her kindness, he keeps his eyes on her. She kneels down at the water's edge, urging him to come and join her. He shakes his head No. She keeps this up, until finally he slowly walks to her, shortly afterward thoroughly enjoying the water as he holds onto the board. (This is a very teachable/preachable scene that could serve as a parable of how God woos us to come and follow in God's way.)

Another inspiring, earlier, scene is that in which Bethany decides to go back into the water after she is home from the hospital. At first she is so dispirited because she cannot compete in an upcoming surfing event, that she gives away her surfboards to young fans. Her struggle to perform simple kitchen chores depresses her. Her father had tried to encourage her to go back in, but Cheri, sensing that their daughter would have to decide this for herself, had restrained him. Nonetheless we see him drilling two holes into a surfboard. Thus when Bethany decides on her own to try surfing again, he reveals that he has modified a board by adding a small piece of rope near the front so that the one-armed girl can more easily hold the board. Her first attempts to stand up on the board end in failure, as she is overwhelmed by the power of the waves and the challenges of finding balance without her left arm.  When she finally succeeds at keeping her balance and staying afloat, it is a joyful moment for the theatre audience, as well as for her family watching from the shore.