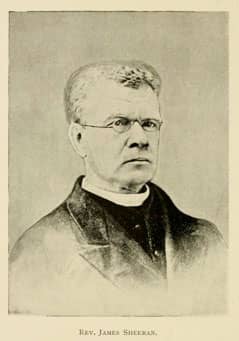 On a Sunday evening in May 1865, at the end of the Civil War, a small wiry man, ragged and unshaven, knocked on the door of the priests' residence at St. Alphonsus Church in New Orleans. Other men, penniless veterans, often knocked. But this man wasn't looking for help; he was coming home. For four years, Father James Sheeran had ministered to the sick and dying on numerous battlefields. When the priests recognized him, they made him stay up late that night relating his experiences.

At 46, Sheeran had lived more lives than most: immigrant, entrepreneur, husband, father, widower, teacher, priest, soldier. Born in Ireland in 1819, he emigrated at twelve. As an adult he became a successful businessman with a wife and two children. In Michigan, he taught at a school run by the Redemptorists, a religious order working mainly with immigrants. But his wife's death in 1849 changed everything.

Widowers had two choices: remarry or send the children elsewhere. He chose the latter, for he'd begun thinking about priesthood. In 1855, he joined the Redemptorists. But leaving his children, he wrote, "was like tearing the heart from my bosom." Shortly before his ordination in 1858, his daughter became a nun, but died soon thereafter. (Nothing is known of the son.)

When the war began, Father Sheeran was stationed in New Orleans. He answered the call for Confederate army chaplains, having become an enthusiastic Southerner. Because the Catholic Church took no official stance on the war, bishops North and South supported their respective sides, and so did their priests.

Sheeran was assigned to the 14th Louisiana Infantry, a unit composed mainly of Irishmen from New Orleans' docks. It participated in the Confederacy's greatest victories. It fought at Gettysburg. It underwent the horrors of the 1864 Wilderness Campaign, when Grant relentlessly hammered at Lee. It was there when the Shenandoah Valley fell to Union troops, and it stacked its arms and flags after the surrender in 1865.

At that time, a chaplain's duties weren't clearly defined. When asked for advice, a veteran chaplain replied: "Do what you can. Learn as you proceed." With few priests in the army, Sheeran visited various units celebrating Mass, hearing confessions, and occasionally baptizing. (He once preached for an hour and a half on the topic of mortal sin.)

He also broke up poker games and gave the winnings to Catholic causes. He chided profanity and drinking. He scolded stragglers on the march. None of this seems to have lessened the men's affection; it may have increased it. For Christmas 1862, they raised over $1,200 for him, which he gave to charity.

Sometimes he got in trouble for ignoring protocol. After Stonewall Jackson reprimanded him, he replied that as an "officer in God's army," he outranked every other officer, including Jackson, and would go "wherever called." One historian notes that Jackson "looked with undisguised astonishment on the bold priest" and left without a word.

Jackson drove his men hard. In the field Sheeran had "the luxury of a gravelly bed." To ease his lot he tried musing on the saints' sufferings, but he considered them "child's play compared with what Confederate soldiers had to endure."

He lectured prisoners on the Confederate cause. For Sheeran, slavery was essentially a private matter, and government had no right to interfere. He regarded abolitionists as "fanatics" kindling "the fire of social and political discord," equating them with the anti-Catholics who burned churches and convents up North.

For some Southerners, Sheeran was the first Catholic priest they met. Dining with a Methodist family, he revealed his identity (he wore a uniform). The wife replied:

What! A Catholic priest! I do want to know! Are you a Catholic priest? Well I declare! Do you ever preach? I would like to hear you! I never saw a priest before!

The daughter stared in amazement but, he wrote, "I think I left her under the impression that priests were at least not devils."

He described battles he witnessed. Chancellorsville, where Confederates defeated a force twice their size, was "the most revolting scene I had ever witnessed." Burning underbrush charred "many of the wounded to a crisp." Of Gettysburg he wrote: "Had Hell itself broken its boundaries, it would not have presented a more terrifying spectacle." Although considered brave, in his diary he confided: "I was never yet on a battlefield that I was not afraid."

During the spring of 1864, the armies slugged it out in what Sheeran called a "work of human slaughter." From morning till night he anointed the dying, bandaged the wounded, and washed the sick. He couldn't celebrate Mass because he gave away the last of his wine. At one point he fell asleep on the march. Wandering a battlefield, he nearly fainted from the sights and smells.