Friendship and the Language of Sex

Editor's Note: This is an excerpt from a homily on the prayer of Tobiah, delivered by the author at Corpus Christi Church, Manhattan, for Lenten Vespers April 3, 2011. You can read the full piece, here. 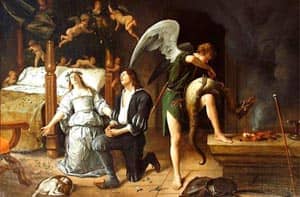 When the girl's parents left the bedroom and closed the door behind them, Tobiah arose from bed and said to his wife, "My love, get up. Let us pray and beg our Lord to have mercy on us and to grant us deliverance." She got up, and they started to pray and beg that deliverance might be theirs. He began with these words:
"Blessed are you, O God of our fathers; praised be your name forever and ever.
"Let the heavens and all your creation praise you forever.
"You made Adam and you gave him his wife Eve to be his help and support; and from these two the human race descended.
"You said, 'It is not good for the man to be alone; let us make him a partner like himself.'
"Now, Lord, you know that I take this wife of mine not because of lust, but for a noble purpose.
"Call down your mercy on me and on her, and allow us to live together to a happy old age."
They said together, "Amen, amen," and went to bed for the night. (Tobit 8:4-9a)

The prayer of Tobiah and Sarah takes place in the middle of an early 2nd-century B.C. religious novel, a story in a vein similar to that of Jonah. It's the story of Tobit, a wealthy, pious Israelite living among the Israelites deported to Nineveh after the Northern Kingdom of Israel was conquered in 721 B.C.

Taken as a whole, the book of Tobit gives an impression of how the author sought to reassure his fellow Jews of the need for prayer, almsgiving, and right living according to the law of Moses. The prayer of Tobiah and Sarah uttered just before they consummate their marriage gives us a good indication of how they perceived their religious and familial duties. But it also offers us a new way of considering our own social relationships, by calling to mind cultural assumptions very different from those we experience in the 21st century.

I want to call attention to the most obvious point in this text: namely, that husband and wife pray before they have sex. In so doing, they name and make explicit the fact that they want their sexual communication to reflect a divine purpose: "I take this wife of mine not because of lust, but for a noble purpose." Earlier, in 6:18, Raphael tells Tobiah that Sarah "was set apart for you before the world existed." God intends for Tobiah to marry Sarah, and for both of them to experience the joy of sex. (Compare 3:8, where Sarah's maid remarks about Sarah's curse and observes "you have already been married seven times, but you have had no joy with any one of your husbands.")

If we grant that the author's view of sexuality was still embedded in an androcentric view of marriage, we can nevertheless acknowledge that Tobiah's words represent a desire that their sex be not an expression of selfishness (lust), but rather of mutual action toward a greater good. To put it more simply: both Tobiah and Sarah recognize that their sex cannot, under the circumstances, be just about pleasure. There's a larger story within which they are both actors, a story shaped directly by God through the agency of the angel Raphael. Their sex is made possible only because Raphael has taught Tobiah how to expel a demon that has afflicted Sarah for many years, and killed seven previous husbands before they could consummate the marriage.

"You know that I take this wife of mine not because of lust, but for a noble purpose." This prayer acknowledges plainly that lust is a reality, and that it can misshape a person's attitude toward another. Yet it also acknowledges that there can be a "noble purpose" in sex. Immediately before Sarah and Tobiah are alone, Sarah's parents prepare the bedroom and lead Tobiah to it. They understand full well the gravity of the situation facing the young people, but in their love for their daughter they want nothing greater than that she and Tobiah consummate their marriage.

To put it bluntly: they want Sarah and Tobiah to have sex. They want Sarah to be free of her curse, to experience the joy of love, and to embark upon a life that fulfills her heart's desire for a family. Later, after they see that the curse has been broken, Sarah's father rejoices with a fourteen-day feast, twice the usual length, saying "you shall not stir from here, but shall remain here eating and drinking with me; and you shall bring joy to my daughter's sorrowing spirit" (8:20). He and his wife dearly love their daughter, and therefore love the man who has made her free.