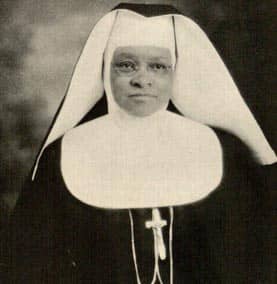 In his highly recommended The History of Black Catholics in the United States, Father Cyprian Davis notes that African-American women were among the country's first Sisters. In 1829, several Haitian women in Baltimore women founded the Oblate Sisters of Providence. At New Orleans in 1842, two New Orleans ladies, "free women of color," founded the Sisters of the Holy Family. In 1916, in the Jim Crow South, a French priest named Ignatius Lissner and an ex-nun named Elizabeth Williams founded the Franciscan Handmaids of the Most Pure Heart of Mary.

During her lifetime, Elizabeth Barbara Williams was associated with all three groups. Born in Baton Rouge, she was the oldest of nine in a devout Catholic family. (Her cousin John Plantevigne was one of America's first Black priests.) Around age 19, she joined a contemplative community in Convent, Louisiana, an offshoot of the Holy Family Sisters. Taking the name Sister Seraphim, she stayed there until New Orleans' Archbishop James Blenk dissolved the community in 1913.

The official reason given for the dissolution was the Mother Superior's death, but a more potent factor may have been Southern racism. Many—Catholics included—found Black women in habits to be a threat, and Blenk wasn't one to challenge such objections. (He banned Elizabeth's priest cousin from working in New Orleans, alleging "a negative reaction from whites." It was said Plantevigne died of a broken heart.)

She transferred to the Oblates as Sister Mary Theodore, but left in 1915. Although the reasons are unclear, her forceful personality may have played a role. From there, she became a receptionist in a Washington, D.C. convent, but the Sisters didn't know her background. Still, she never abandoned hope of returning to religious life and she (literally) held on to her habit.

Elizabeth found a spiritual director in Father John Fenlon, a priest associated with the faculty of The Catholic University of America. Fenlon liked her and encouraged her not to give up on her vocation. Soon he had a visitor from Georgia, Father Lissner. In 1915, Georgia saw Leo Frank's lynching, the Klan's resurgence, and anti-Catholicism at a fever pitch. Lissner was particularly worried about a bill banning white teachers in Black schools.

A French-born missionary serving Georgia's Black Catholics, Lissner had founded several schools, all staffed by white Sisters. He now decided to pursue a longtime dream of starting a community for Black women. Fenlon suggested he contact Elizabeth Williams, whom he phoned. Lissner recalled that she nearly bowled him over with enthusiasm. Although he thought her "a little headstrong," he "was satisfied that she had a vocation and could render a valuable service."

The feared bill never passed, but Lissner went ahead with his plans. In September 1916, after he purchased a house for the new community, Elizabeth arrived (with habit) and soon took vows as Mother Mary Theodore. She would be the superior. In a short time, a handful of young women gathered around her. They called themselves the Handmaids of the Most Pure Heart of Mary.

The response from the local community, Black and white, was largely positive. But one exception came from white nuns. Lissner recalled:

As real Southerners, they could not believe that a Colored woman could make a real Religious Sister . . . "It is a shame," they said. "Fr. Lissner will soon find out his mistake. He may give them the veil, but will that prevent them from stealing chickens and telling lies?"

Lissner, whose father was Jewish, was also subject to prejudice. The local bishop, a Civil War veteran later buried with a Confederate flag, wrote privately that the priest had "all the objectionable traits of the race."

The Handmaids took over one school, and operated a laundry to support themselves. They begged in markets along Savannah's waterfront. But Mother Theodore, described as "a woman of courage, strong faith, and an ability to bear many trials without discouragement," held them together. Clearly there was little future in Savannah, but Lissner observed, "God knows how many souls they reached."