A God of Joy and Pleasure: Reflections on Psalm 16

Lectionary Reflections: Year A
Second Sunday of Easter
May 1, 2011
Psalm 16
Every preacher knows all too well that the Sunday after Easter, in addition to its obvious anti-climactic sense, brings with it vastly smaller crowds, an absence of trumpets and timpani, and an anthem the choir already knows. And at first glance at least, Psalm 16 is a decidedly odd little poem, too much of which we cannot easily translate. Just like the collectors of the lectionary to saddle us with this peculiar piece on the day when we are worn out from Holy Week, facing similarly tired, though particularly faithful, congregants.

So, we should ask ourselves: what are we to make of Psalm 16 on the Second Sunday of Easter? Perhaps we should start by reminding ourselves that we are still in the season of Easter. Just because Jesus has been raised from the dead—accompanied by well-dressed and jubilant worshippers—is no time for us to return to the same old same old, namely fewer folk dressed in their older clothes and back in their familiar pews. What the next Sundays are about, I suppose, is what are we to do now that Jesus is alive? Death did not have the last word, and the promises and challenges he spoke are thrillingly as alive as the one who spoke them. And so . . . Psalm 16?

The poem starts clearly enough: "Protect (guard) me, God, because I take refuge (hide, shelter) in you" (v. 1). The psalm is rather unique, because it appears to have as its subject an Israelite confession of faith, as verse 2 suggests: "I said to YHWH, 'You are my Lord (Master); no good for me comes apart from you.'" Unfortunately, the latter part of that verse makes no clear sense in Hebrew. It could be read rather literally, "My good is not against you," which might mean something like, "Whatever good I have is not claimed against you; i.e. do not call me arrogant, God, if I say I am good." But that is a guess only.

And the difficulties persist in the next two verses. "As for the holy ones (priests?) in the land, and the mighty who were all my desire, let their sorrows be many; they have betrothed another!" This reading is very far from the NRSV, but my reading is as conjectural as theirs. I assume that the poet is referring to false priests and great leaders of the land who have turned their attentions to other gods. Unlike these pagan believers, the psalmist has announced his trust in and worship of YHWH alone, though he once was greatly attracted to these "holy ones" and "mighty ones" and their pagan beliefs. I insert the verb "were" in verse 3 to indicate that the poet has now changed his mind and has turned himself to YHWH. These conjectures find strong support in the rest of verse 4 that is very clear Hebrew at last: "I will not pour out their drink-offerings of blood or take their names upon my lips" (v. 4b).

The psalmist proves his conversion to belief in YHWH in verses 5-6: "YHWH is my chosen portion and my cup" (this cup is not filled with the abominable bloody drink-offerings of the pagans of v. 4); "you hold my lot." The word "lot" could as well be translated "fate." The lot in ancient Israel was a kind of game of chance that often determined the fate of the nation. See, for example, the lots that chose Saul as the first king of the land (1 Sam. 10) and the same lots that determined the near death of Saul's son, Jonathan (1 Sam. 14). The poet affirms that YHWH holds his fate, not some pagan deity.

The NRSV assumes that verse 6 refers to a physical location: "The boundary lines have fallen for me in pleasant places; I have a goodly heritage." One could also read, "An inheritance fell to me with delight; my estate, too, is lovely to me." If that translation is given, the poet may mean that he celebrates his continuing connection to YHWH that sustains him in his life and belief. This latter reading is supported by verse 7: "I bless YHWH who gives me counsel; especially in the night my conscience teaches me." Again my translation differs from the NRSV, because here the word it reads "heart" is in fact the Hebrew "kidneys," the place in the body thought to be the source of deep emotion, not the place of will or intelligence, which is the "heart." The psalmist expresses his deepest gratitude that YHWH offers him counsel even through his strong place of emotion and desire.

"I keep YHWH always before me; because he (God) is at my right hand, I will not be moved" (or "will not stumble") (v. 8). The poet is sturdy and solid, because YHWH is ever near, as close as his right hand. And because of that solidity, that certainty of YHWH's presence, "my heart is glad, and my 'pulse' rejoices; my body also rests secure" (v. 9). The NRSV reads Hebrew kavod as "soul" (though the word is regularly translated 'glory') but I have tried to illuminate the poet's concern to use various parts of the body to illustrate his complete physical and emotional connection to YHWH alone. The "kidneys" ("conscience" in my reading) of verse 7 lead to the "heart" and "pulse" of verse 9, then finally to the "whole body" resting securely and in safety. 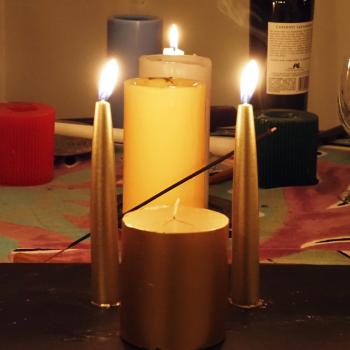 Discipline and Punish: A Guide to Power in American Evangelicalism
Kristin Du Mez
4

Christian Victimhood
C. Don Jones
Get Patheos Newsletters
Get the latest from Patheos by signing up for our newsletters. Try our 3 most popular, or select from our huge collection of unique and thought-provoking newsletters.
From time to time you will also receive Special Offers from our partners that help us make this content free for you. You can opt out of these offers at any time.
see our full list of newsletters
Editor's picks See all columnists