A Good Stretch of the Legs

I don't have a home parish anymore. I did for several years, but then administrative and architectural changes—one following the other, like cars in a funeral cortege—warped the ambience so thoroughly as to render the place unrecognizable. Once a Rhodesian-born schoolmate complained to a friend of mine that her native country no longer existed. This was before Robert Mugabe started running amok, so the sentiment struck me—as it had struck my friend—as reactionary. Now I get it.

Since this past December, I've been church-hopping. Every weekend, as Sunday creeps closer, suspense builds: where will I attend Mass this time? I make a game of it, putting off my decision until the very last minute. Actually, it's more of a hustle than a game. Realistically speaking, I have only four or five churches to choose from. Each has as much to distinguish it from the competition as a McDonald's franchise. Like lunch under the Golden Arches, service at any of these neighborhood churches is bearable, but not especially memorable.

In a very moving essay for America Magazine, Gerald Schiffhorst asks himself why he has remained a Catholic while so many of his contemporaries have not. He concludes it has nothing to do with doctrine or dogma, but with how the Church prays:

. . . that is, how the liturgy expresses a mystical core more ancient than the faith itself through rituals that still resonate in the heart, not just because of their beauty, but because of their seriousness.

As they used to say on Family Feud, good answer. It can't be mine, though. I've always regarded the liturgy the way I regard NASCAR and Star Trek: as a wholly admirable institution that simply fails to grab me. That raises the question of what, exactly, I count missing from my old parish, of what I cajole myself into hoping for in the several present candidates. It also hints at the much more important question of what I expect from the Church, capital-C, period.

In the broadest, most abstract sense, the answer is embarrassingly simple. I am looking for a place to stretch my legs.

Gerald Schiffhorst takes his cues from his memories of growing up in a German section of St. Louis. I am coming to realize that I take mine from memories of attending a Jewish summer camp in Maine. Which sect or denomination of Judaism it affiliated itself with I can't guess. The kitchen was strictly kosher; on field trips, we gave a wide berth to any restaurant chain that cooked with animal fat. (That included McD's—gourmet fare by my youthful lights.) Very few people wore kipot; one exception was the owner, who often accessorized his with a karate gi.

I was a stressed-out kid, always a step and a half behind the curve. I loafed in basketball games, showered in a swimsuit. During my deep-water test, I panicked as though a U-boat had torpedoed my ship off of Murmansk, and had to be hauled, screeching, into a canoe. I came to appreciate the concept of a Sabbath, because, facing such trials six days out of every week, I needed one where I could rest.

In that respect, the Sabbath Queen lived up to her press releases. I can no longer speak to the quality of the preaching or any of the cantors, but I do remember hearing the wind rustle the leaves of the shade trees, seeing it ruffle the surface of the lake, and feeling very close to nature. The ark containing the Torah scrolls was wedged in the space where a tree trunk split in two. The pews, likewise, were made from hewn logs. If you felt like sliding off one and sprawling on the grass, that was just dandy.

I did not then have a mind that reached toward God. In fact, being a Manhattan kid, I did not even have a spirit that embraced nature without reservation. But I knew infinity when I felt it. Stretching out my legs enabled me to stretch out my mind—if not quite to the divine, then to earthly possibilities improbable enough to be sublime. I pictured myself rescuing one or another of the girls (or just as often, their Bard-bound counselors) from Orcs or Iranians, and earning a reward I was too young too define. Being allowed to forget you suck at basketball is a good, practical definition of liminality.

Flash forward two-and-a-half decades, by which time I was beginning my catechesis. I had grown into a stressed-out adult, a corporate bench-warmer, and a failure in the deep-water test of home ownership. On the Sunday following my conversion experience, I found my way to a church that turned out to conduct its services in somewhat the same back-to-nature spirit I remembered from my days as an unhappy camper.

The place was missing a lake; naturally, the chapel had no grass to sprawl on. But at the edge of the courtyard stood the skeleton of a saguaro cactus, its two arms raised in a pose evocative of the risen Christ—a goyische Torah tree. Behind the altar of the main chapel, during Easter season, hung a painting of the risen Christ almost crude enough to have emerged from an arts ;n' crafts shed. Once all the folding chairs had been claimed, if you could find a few feet of space on the carpeted steps leading down to the floor, sprawling was permissible.

The Other Holocaust
Bert Bigelow
3 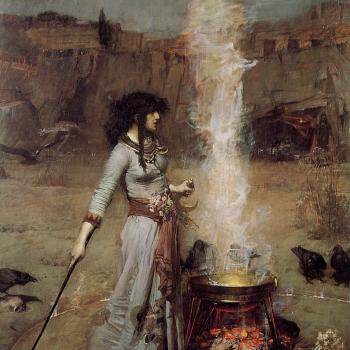 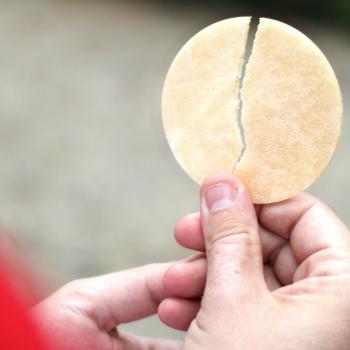 Who is Weaponizing the Eucharist? Politicians, Not Bishops
Matthew Schneider
Get Patheos Newsletters
Get the latest from Patheos by signing up for our newsletters. Try our 3 most popular, or select from our huge collection of unique and thought-provoking newsletters.
From time to time you will also receive Special Offers from our partners that help us make this content free for you. You can opt out of these offers at any time.
see our full list of newsletters
Editor's picks See all columnists