During my years as a prison chaplain, it was common for inmates—most of whom were persons of color—to view their circumstances as analogous to slavery. Within this context, I found it useful to frame their church experience as a response to oppression. As the late sociologist E. Franklin Frazier notes in his classic study, The Negro Church in America, one of the church's primary functions within a context of Southern white oppression was to provide the black man "an opportunity for self-expression and status" denied him in the larger society.

Functioning as "a nation within a nation," he writes, the church became "the main area of social life in which Negroes could aspire to become leaders of men. It was the area of social life where ambitious individuals could achieve distinction and the symbols of status. The church was the arena in which the struggle for power and the thirst for power could be satisfied."

In my experience, what Frazier observed of the Negro church-as-political-proxy under Jim Crow can be applied in large measure to the prison church today. Depending on the racial climate of the institution, the oppression experienced by inmates may or may not be primarily racial in nature, but it is oppression nonetheless.

To enter any prison is to enter a world within a world. In, but not of, society, the prison has its own culture, language, rules, and ethics. Such is to be expected because, as criminologist Todd Clear wrote in a 1992 study, "Prisoners, Prisons and Religion": "A prisoner is a social outcast . . . To be shunned by one's community is to invite a special kind of shame, the mortification that comes with undeniable public rebuke."

To be sure, such rebuke, as seen in the systematic deprivation of privileges previously taken for granted, may be considered a just consequence of the criminals' misdeeds—doing the time for doing the crime.

Yet the insensitivity, neglect, and outright brutality inmates often experience from staff is not. Indeed, a common complaint among prisoners is that corrections officers are in some cases rewarded with promotions and desirable assignments for exhibiting the same kind of behavior that led to the inmates' incarceration in the first place. Such abuse further pollutes an atmosphere that is already filled with the self-recriminations of men and women whose lack of education, employment, and life-management skills often helped to lead them to a life of crime in the first place.

Most prisoners are given few opportunities for self-discovery, and little hope of redemption, for multiple reasons: cutbacks in prison education and training programs; increasingly restrictive policies regarding family visitation and other privileges; and political campaigns portraying them as animals not worth saving. Thus the importance of the prison church, with its emphasis on personal atonement and the intrinsic value of the individual, its ritual cleansing through baptism, its intellectual stimulation through Bible study, and its opportunities for self-expression through testimony and often-ecstatic worship.

In the church, an individual hungry for recognition can be recognized in a positive manner. Known outside the church by his or her last name, inmate number, and housing unit (i.e., prison mailing address), the prisoner is embraced in the church as "Brother" or "Sister," and treated with a dignity shown virtually nowhere else in the prison. Similarly, to hold a position in the prison church confers upon the office-holder a level of trust he or she has likely never before experienced. Given both the training and the opportunity to demonstrate responsibility (within appropriate parameters), an inmate will often rise to the occasion, developing an understanding of leadership and mutual accountability in the process.

The prison church also gives a sense of purpose to the believers within the walls. The nation's prisons contain within them a potential leadership pool that has "been there and done that." These potential leaders understand clearly the wages of sin and continue to reap what they have sown. For many inmates, their most enduring legacies are the progeny that wreak havoc on our city streets, the next generation of criminal offenders who are following in the footsteps of their mothers and fathers.

So these potential leaders are highly motivated to share the lessons they have learned with the people they have left behind. Yet they cannot do so on their own. The voices that at-risk children in America's urban wastelands most need to hear—the voices of their fathers and mothers, who have walked that path and know where it leads—are confined behind prison walls.

Inmates require the assistance of outside pastors and other faith leaders who will walk alongside them as mentors and serve as bridges of grace between them and their families.

The prison church, constrained and confined, can only go so far. It remains an extraordinary untapped resource for the transformation of America's inner cities. It just needs the help of churches outside the walls.

We Are All Philosophers - John Frame
Michael Bird
2 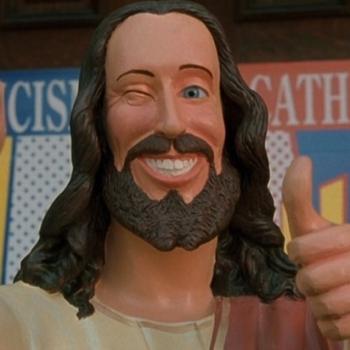 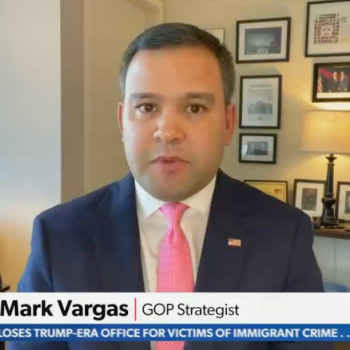 Newsmax Panelist Falsely Claims Saying "Under Allah" in the Pledge is...
Hemant Mehta
Get Patheos Newsletters
Get the latest from Patheos by signing up for our newsletters. Try our 3 most popular, or select from our huge collection of unique and thought-provoking newsletters.
From time to time you will also receive Special Offers from our partners that help us make this content free for you. You can opt out of these offers at any time.
see our full list of newsletters
Editor's picks See all columnists