Is Good Friday Good for the Earth? 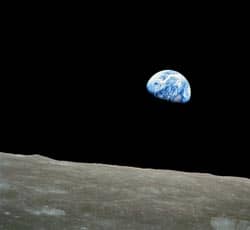 This year, Good Friday is also Earth Day. Should Christians care? After all, compared with the ancient traditions of Holy Week, Earth Day is a mere pup. Its shallow roots run back to a Christian peace activist and former Pentecostal pastor named John McConnell, Jr., who came up with the name and helped organize the first observance on March 21, 1970. Senator Gaylord Nelson of Wisconsin soon took the name under questionable circumstances and established the April date and activist tone that have stuck ever since. Noteworthy as it was (millions participated), April 22, 1970 certainly was not a day that changed everything. Good Friday was.

Perhaps, however, approaching this calendar coincidence as though it were a match-up in an NCAA tournament bracket is the wrong idea. (Good Friday wins that competition as though it were the Kansas Jayhawks versus Prairie View A&M.) Another way to frame the question is to ask: Is Good Friday good news for the Earth?

Christ's sacrifice is certainly good news for the people of the Earth. What about the rest of the planet? The Gospel of John tells us (in a verse so often repeated that we may quote it in the familiar King James English without even hearing it) that God "so loved the world that He gave His only begotten Son." The word is kosmos in the Greek,suggesting that the Trinity's care extends beyond humanity to all of creation. We see glimpses of that broader love throughout the Bible -- from an angel's advocacy for Balaam's donkey to the prophet Habakkuk declaring the Lord's judgment on the Babylonians for their destruction of Lebanon's trees and wildlife. The Lord still loves what He created and called "very good"at the beginning.

Does Good Friday express that broader love? John 3:16 alone does not make this clear. After all, it says that whosoever believes in Christ shall have everlasting life. It does not say whatsoever. Plus, there are complexities involved in translating kosmos, and the word is used in multiple senses in the New Testament.

Thankfully, there are other sources of biblical guidance. Paul, in a rousing Christological crescendo in Colossians 1, declares that in Jesus "all things hold together." On Good Friday, he says, God reconciled to himself "all things, whether things on earth or things in heaven, by making peace through his blood, shed on the cross." Hope College professor Steven Bouma-Prediger says of this passage, in his award winning exploration of creation care, For the Beauty of the Earth, "Christ is Lord, and his reign is cosmic in scope. The ubiquitous ‘all things' thumps like a constant drumbeat throughout this text, forcibly reminding us that nothing lies outside the creative and redemptive scope of God's grace."

C.S. Lewis addressed this all with his usual aplomb in Mere Christianity:

It says in the Bible that the whole universe was made for Christ and that everything is to be gathered together in Him. I do not suppose any of us can understand how this will happen as regards the whole universe . . . What we have been told is how we men can be drawn into Christ . . . And there are strange, exciting hints in the Bible that when we are drawn in, a great many other things in Nature will begin to come right. The bad dream will be over: it will be morning.

Indeed, the groaning creation itself seemed to join in the drama of Good Friday when darkness descended over the land, and the rocks then cried out with an earthquake announcing the start of a new morning for all of the kosmos as a risen Jesus, mistaken for a gardener, emerged on Sunday to make all things new. Yes, Good Friday and Easter were indeed days of good news for all the Earth.

How then should Christians relate to Earth Day? Not even the leaders of the evangelical "creation care" movement agree on that one. Rusty Pritchard of Flourishwould prefer as an alternative to emphasize the applicable elements of Thanksgiving (not watching football, ingesting large quantities of tryptophan, and indulging in day-after shopping, but thankfulness to God for his creating and sustaining all things and the remembrance of our connection to Him and His works). Others, such as Dr. Matthew Sleeth of Blessed Earth, wish to "make Earth Day a Church Day." The Evangelical Environmental Network, on the other hand, is trying to build a National Day of Prayer for Creation Care from the ground up in May. Each of these approaches has its own set of advantages and perhaps an "all of the above" strategy best serves the Kingdom.