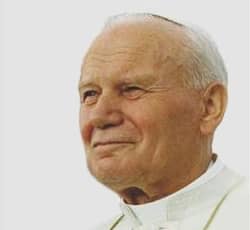 As we approach the beatification of Pope John Paul II, media headlines continue to question whether the beatification might in fact be too hasty or, worse, erroneous. While valid questions are raised, I think the issue of John Paul II's sanctity has been somewhat conflated with the Church and the Vatican's handling of the sex abuse crisis.

Last week, John Allen, a Vatican journalist whom I generally admire, wrote a troubling piece for Newsweek in which he suggests that the crisis might be cause to at least delay the beatification. In a subsequent piece for the National Catholic Reporter, he seems to clarify his position and argue that there's nothing amiss with the beatification itself.

Meanwhile, George Weigel wrote a thorough defense of the beatification process as it relates specifically to John Paul. Maureen Dowd, however, seemed to take a cue from Allen's first piece. She writes, "Not beatifying or canonizing John Paul would be hugely symbolic, a message far more powerful than the ad hoc apologies and payoffs to victims."

Beatification is one step toward canonization when someone is formally declared a saint. In this first phase, it is determined that the individual lived a life of heroic virtue. Numerous witnesses are consulted, as well as the person's own work, writings, etc. In addition, one documented miracle must be present. Once the person is beatified, permission can be sought to venerate the blessed person in a particular locale. Upon canonization, the individual can be acknowledged as a saint and publicly venerated throughout the world, no special permission required. The declaration of sanctity does not make the person a saint. That individual is already a saint in heaven regardless of who confirms it.

John Paul II lived life well; he was holy. We see it in the pictures of his youth and early priesthood. We see it in his writings and teachings. We hear of it from people who knew him. As pope, he provided the witness of someone who was always ready to take up the cross. He was a consummate pastor. He didn't cow to intimidation. That's part of the reason he played such a crucial role in the collapse of communism.

When the sex abuse crisis was uncovered in the United States in 2002, Americans were already used to rapid response news. We'd seen the O.J. Simpson chase live almost ten years before. Since that point, cable news and the nascent internet kept us up to speed on all breaking news. For Americans, it was unfathomable that the Vatican would be so uninformed on a major news story that directly affected the Catholic Church and her clergy. But in fact, the Vatican was woefully unaware and ill prepared to respond. It took several weeks for the Vatican to be fully apprised of the facts and longer to respond.

However, fully apprised of the situation, John Paul II addressed the evil of the abuse scandal at the end of a Sunday Angelus. In his Holy Thursday Letter to Priests that same March, he wrote of the priests who had given in to the "most grievous forms of the mysterium iniquitatis [mystery of evil] at work in the world." He made similarly strong statements to the American cardinals whom he summoned to Rome just weeks later: "The abuse which has caused this crisis is by every standard wrong and rightly considered a crime by society; it is also an appalling sin in the eyes of God."

Not unlike Pope Benedict, John Paul II did a much better job of communicating about the crisis than have others affiliated with the Vatican.

Naturally, questions like the pope's friendship with Father Marcial Maciel Degollado, the now disgraced founder of the Legionaries of Christ, surface and demand an accounting. According to some reports, Maciel paved his way with gifts, including cash. One man known to decline the gifts was then Cardinal Ratzinger who is now Pope Benedict XVI.

By this point, particularly after the investigation for the beatification of John Paul II, the Vatican has to know who was involved in covering up for Maciel. So far, there has been no public evidence that John Paul II knowingly facilitated his lies and deceits. Were there such evidence, the beatification would not be going forward. However, someone had to know. In all probability, the Vatican now knows.