The Language of Science and Faith: An Overview 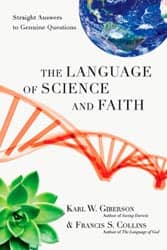 All books have a history. The Language of Science and Faith started with Francis Collins's decision to write The Language of God: A Scientist Presents Evidence for Belief, which went on to become a bestseller.

The Language of God told the story of how Francis found harmony between his science and his Christian faith. He was a worldclass scientist—he had led the Human Genome Project to a successful completion and then went on to become the head of the National Institutes of Health, where he presently works. But he was also a committed believer with a winsome and inspiring testimony. His story moved readers who were wrestling with questions of faith and science, and seeking the place of rest that Collins had found in his own journey.

Letters and emails poured in, asking for wisdom and insight. Readers wanted to dig deeper. Many had questions not addressed in The Language of God. Soon Francis was buried in a pile of "Frequently Asked Questions." Addressing these questions individually was simply not possible, but many of them were passionate and came from people with real struggles. Ignoring them was not an option.

Necessity, as they say, is the mother of invention. So Francis began to think of a way to address these concerns. The result was The BioLogos Foundation, which came to life in 2008 and went online at www.biologos.org in the spring of 2009. The FAQ section of the website contains early versions of answers to the many questions that inspired this project. The BioLogos Foundation has grown into a significant project, but it would never have been born if those many thoughtful readers of The Language of God had not taken the time to share their struggles with Francis.

And yet . . . the world is awash in books about the relationship between science and religion. Why do we need another one?

Read an excerpt from this book here.

Read a review of this book by Patheos Managing Editor Kathleen Mulhern here.

The short answer is that this conversation is important. Some topics—raising children, looking after the planet, improving society, searching for meaning—merit continuous consideration. No book, no matter how grand, will ever close any of these conversations—for each generation, each decade, even each year, brings its own fresh set of issues and new perspectives. The intersection of science and religion is an important crossroads, for it is there that the world of facts meets the world of values. It is there that we ask our deepest questions: How did we get here? Does our existence have a purpose? Does God exist? How is God revealed in the world? How do we relate to the rest of nature? It is there that we reflect on our religious commitments and decide what to embrace as ultimate truth.

The Language of Science and Faith surveys this intersection. The authors are evangelical Christians, committed to the historic truths of Christianity and the central role of the Bible in communicating those truths. But as scientists, the authors are mindful that the changing understanding of the natural world invites continuous reconsideration of some of those truths, particularly those relating to the natural world. Sometimes, as with Galileo, this changing understanding can seem threatening to faith. Other times, as seen recently with the discovery that the laws of nature are fine-tuned for life, this changing understanding is wonderfully faith-affirming.

The intersection of science and religion is a controversial place, filled with potholes, poisonous vines and landmines. Countless assertions, some of them contradictory, are made by Christians with great force on many topics, including the age of the earth, the source of morality, the nature of the Genesis creation account and the origins of humankind. The authors are mindful of these controversies and have striven to offer words of reconciliation and harmony, seeking to avoid adding fuel to fires that have been burning far too long. On the other hand, as scientists, the authors are convinced that there are truths about the natural world that must be confronted, no matter how disturbing they seem. But as Christians, the authors are also convinced that there are certain theological truths—like God is the Creator—that must be integrated into any understanding of nature if it is to be a Christian understanding.